(NASHVILLE, Tenn.) Nov. 2, 2007  Superchicks hit song Hero is currently featured in a new public service announcement (PSA) by NBC Universal. The Green Is Universal PSA announces the companys more than 150 hours of environmentally themed content that will encompass all of NBC Universals divisions across multiple platforms from November 4-10, including NBC, MSNBC, Bravo and CNBC among others.

In addition to appearing on the NBC Universal television platforms, Universal Pictures will run the Green Is Universal PSA as post-roll on its online trailers during the programming week and as ads in theater lobbies.

The PSA can be viewed online at www.inpop.com/video/Superchick/SuperchickGreenPSAtv.mov. The Green Is Universal website will be live soon at www.GreenIsUniversal.com.

Founded in 1999 by newsboys frontman Peter Furler, artist manager Wes Campbell and Inpop President Dale Bray, Inpop Records is home to a variety of artists including newsboys, Superchick, Shane & Shane and Mat Kearney, among others. For more information, visit www.inpop.com. 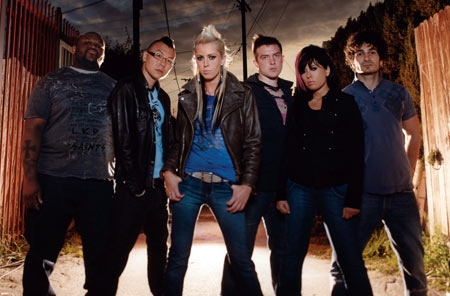