(NASHVILLE, TENN.) -- Slanted Records group JUMP5 received a special visit from former Earth, Wind & Fire lead vocalist and lead guitarist Sheldon Reynolds at the Los Angeles area stop of their current North American tour. When the group hit Saint Paschal in Thousand Oaks, California on November 14th, they were joined on stage by Reynolds, who performed the hit Earth, Wind & Fire classic "Shining Star" with JUMP5, who had a hit of their own with the song, which they covered on their 2003 release, Accelerate (Sparrow Records/EMI).

"It was an unbelievable experience," says JUMP5's Brandon Hargest. "That moment will stick with me throughout my musical career."

"It was completely unreal to be on stage with a legend," says JUMP5's Lesley Moore. "The whole time he was up there with us my jaw was on the ground. It was definitely something I will remember forever!"

Adds JUMP5's Chris Fedun, "I am honored to say I shared the stage with such an icon!"

Reynolds is most widely known for his 14 year tenure with the legendary Earth, Wind & Fire. During that era, the group received an Image Award for Lifetime Achievement, and Reynolds was nominated for a Grammy Award for the popular song "Sunday Morning," which Reynolds wrote and recorded with Earth, Wind & Fire.

Reynolds left the group to join Experience Hendrix, the family company of Jimi Hendrix, realizing yet another lifelong dream of being involved in the musical legacy of one of the greatest guitarists of all time. Reynolds has also worked as a writer and performer with a number of other well-known artists, such as the Pointer Sisters, Stephanie Mills, Chicago, The Commodores and Paula Abdul. Reynolds' vocal work includes the musical soundtrack from the motion picture Glory, as well as theme music for the hit TV shows Who's the Boss? and Chicago Hope.

In 2004, Reynolds produced the talent-packed CD, Power of Soul: A Tribute to Jimi Hendrix, which includes performances from such major artists as Prince, Lenny Kravitz, Musiq, Carlos Santana, Robert Randolph & The Family Band, Sting, Chaka Khan, Earth, Wind & Fire and many others. He is currently producing the debut album from Victoria White, who recently signed to the Maurice White-owned record label Kalimba. Reynolds and White are both currently touring with jazz great Brian Culbertson's A Soulful Christmas tour. For more information, visit www.sheldonreynolds.com.

JUMP5's new holiday album, Christmas Like This, is available today, November 20, 2007, for only $7.99 exclusively through all major digital outlets including iTunes and Rhapsody. Digital distribution for Christmas Like This is through EMI CMG Distribution. The group's official "farewell" album, Hello & Goodbye, was released in October, and they are currently in the middle of a 30+ city North American tour, which kicked off September 7th and runs through the end of the year. The Hello & Goodbye Tour is sponsored by Kingdom Kidz Club and Shoutlife.com, and features performances by Jessie Daniels, Cali, Carried Away, pureNRG, Sammy Ward and Monet (in select cities). 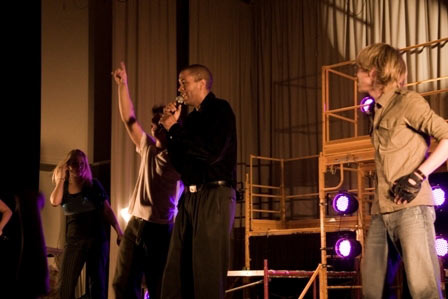