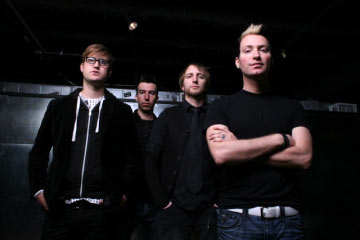 
Seattle, WA...March 25, 2008...Tooth&Nail Records' rock band Thousand Foot Krutch continues to build with their single at Active Rock/Alternative general market radio as they head out on the road this week and begin a full spring tour. The band will also be appearing at numerous summer festivals, which will be followed by another major fall tour.

Two weeks ago Thousand Foot Krutch's Active Rock/Alternative single "Falls Apart" debuted in the Top 40 and continues to move upward currently at No. 33 with increased spins. This marks the band's third Active Rock/Alternative single to break into the Top 40 on the charts following the hit songs "Rawkfist" and "Move." The single is exposing the band to more than 1.9 million accumulated audiences on a weekly basis. In addition to the general market single, Christian radio is behind the new Rock single and title track "The Flame in All of Us," which is currently at No 12.

"This year's been nothing short of amazing," says lead singer Trevor McNevan. "We've been so encouraged by the support the new album ("The Flame In All Of Us") has received, both from a radio and live perspective. With the chart topping success of the first two singles ("Falls Apart"/"What Do We Know") in the CCM market, and a fast moving General Market single on Active rock and Alternative, we couldn't ask for much more."

Supporting their radio success, Thousand Foot Krutch will hit the road this Thursday, March 27th for the COMATOSE Tour with Skillet and special guests Decyfer Down. The tour will hit major cities such as Minneapolis, Chicago, New York City, Columbus and more. For a complete list of the tour dates see below. Following their spring tour, TFK will perform at nine major festivals this summer including Creation East, Creation West, Sonshine, Alive, Spirit West Coast (both), and Kingdom Bound.

TFK won't stop after their packed summer schedule as they are a part of the debut year for the Creation Festival: The Tour beginning in October (dates TBA). TFK will join Kutless along with special guests Pillar, Fireflight and Worth Dying For as well as MC KJ-52.

Expounding on the band's forthcoming tours, McNevan shares, "Touring wise, we're teaming up with long time co-horts Skillet to rock the U.S. for a 32 city tour. Then, following the intense summer festivals, we're heading out for the fall on the Creation tour with fellow Tooth&Nail mates Kutless (as well as Pillar, and a slew of other great bands on the one day traveling festival bill). We're sincerely thankful to everyone for their love and support, and to be a small part of what God's doing."

Thrilled to have Thousand Foot Krutch involved with this first-ever Creation Tour, Nick Kulb, tour producer, states, "We are extremely excited to have Thousand Foot Krutch join us on Creation Festival: The Tour in our first year. They have been a highlighted artist at the Creation Festivals for the past several years and having them as a part of the tour is a very logical tie-in."

Thousand Foot Krutch is comprised of Trevor McNevan, his childhood friend Joel Bruyere on bass guitar and Steve Augustine on drums. The Toronto, Canada natives have sold near a half-million copies to date of their albums Set It Off, Phenomenon, and The Art Of Breaking. The band hit the musical scene with their 2003 Phenomenon album, which landed them six stellar No. 1 songs on rock radio and branched into mainstream radio with songs "Rawkfist" (Phenomenon) and "Move" (The Art of Breaking). It was "Rawkfist" that became the first great sports anthem of the 21st century being heard everywhere from sports stadiums to commercials (NHL, NFL and major league baseball, ESPN) to the WB's Smallville. In 2007, Thousand Foot Krutch released their newest Tooth&Nail Records' studio project, The Flame in All of Us, which has received media acclaim saying the project "marks a bright new chapter for Thousand Foot Krutch." Flame has already produced the band's eighth No. 1 Rock hit for three straight weeks ("Falls Apart") in addition to the third Top 5 CHR hit ("What Do We Know"). For more information on Thousand Foot Krutch, visit: http://www.thousandfootkrutch.com .

For more information on the Creation Festival: The Tour go to CreationTour.com.