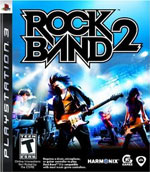 
One of our readers (Jeff M.) wrote in to us last night to let us in on a news report at PS3.IGN.com announcing that the popular and recently released Rock Band 2 video game will be releasing 20 free downloadable songs on November 4 to those who have purchased Rock Band 2 on PS3, Xbox 360, and Wii. Included in the list of mainstream artists will be "The Feeling" by BEC Recordings' Kutless and "Desperate Times, Desperate Measures" by Tooth & Nail Records' UnderOath. Well... it's a start. Hopefully we'll see more artists like these in future game updates.