VEGGIETALES®: MINNESOTA CUKE AND THE SEARCH FOR NOAHS UMBRELLA 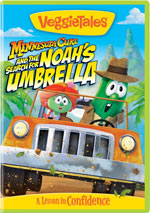 
FRANKLIN, TN (May 4, 2009)  Grab your lasso and fedora! This August, Big Idea will release its second action-packed Minnesota Cuke adventure on DVD, VeggieTales®: Minnesota Cuke and the Search for Noahs Umbrella, A Lesson in Confidence. Supported by a comprehensive marketing, promotional and advertising campaign across TV, print, radio, online and in-theater, Minnesota Cuke and the Search for Noahs Umbrella debuts August 1st in the Christian market (CBA) through Word Distribution ($14.99 SRP) and August 4th in the general market through Genius Products ($14.93 SRP), timed for the back-to-school season.

Inspired by the beloved Bible story of Noahs ark, the new VeggieTales DVD is the eagerly anticipated sequel to the highly successful Minnesota Cuke and the Search for Samsons Hairbrush, released Direct-to-Video in 2005.

VeggieTales fans love Minnesota Cuke, and we are excited to bring him back for an all-new adventure, said Greg Fritz, SVP of Sales and Marketing, Big Idea. Our partnerships with LifeTouch Portrait Studios, CURE International and Chuck E. Cheeses, as well as our comprehensive media plan, will help us reach millions of kids with a timely lesson in confidence as families are preparing for the new school season.

Advertising, Radio and Online Support
A high-profile Christian and general market radio advertising and promotional campaign will run on top-tier stations in July and August. Indoor spots will be broadcast on closed-circuit TV in more than 1,000 quick service restaurants, including McDonalds, Wendys and Arbys. TV promos will run on broadcast and cable networks in VeggieTales 10 top markets during August. Print ads will run in select parenting and family publications, including Faith & Family, Focus on the Family, Purpose Driven Connection and MomSense. Big Idea will also advertise and run extensive promotions on key family-friendly websites.

Promotional Partners
LifeTouch Portrait Studios: Say...cucumber! LifeTouch Portrait Studios will support the release of Minnesota Cuke and the Search for Noahs Umbrella with a fresh national promotion at 730 retail locations this August. As part of the program, LifeTouch will include brand advertising inserts and coupons in portrait packages, provide customers with VeggieTales stickers, and play a special DVD preview of Minnesota Cuke and the Search for Noahs Umbrella on their waiting area TV monitors. Chuck E. Cheeses: The music video for VeggieTales latest silly song, Sippy Cup, written by celebrated Christian recording artist, director and producer Steve Taylor, will play in the family restaurants 529 locations for a three-month period, beginning in August.

Live Events
Timed to the DVD release, Big Idea has coordinated a bushel full of VeggieTales-themed events for families to enjoy. This summer, more than 35 movie theater screening events for Minnesota Cuke and the Search for Noahs Umbrella will be held across the country on August 1st sponsored by CURE International. Local market radio stations will promote the screening and release of the new DVD with on-air contests to win tickets to the events. Key event cities include Atlanta, Boston, Chicago, Dallas, Houston, Minneapolis, Seattle, Tampa, and more.

Additionally, churches may choose to host a Church Communication Network (CCN) Satellite Delivery Premiere Event. During the months of July and August, Minnesota Cuke and the Search for Noahs Umbrella will be available for broadcast to more than 2,000 CCN network member churches.

CBA Exclusive  Free Gift with Purchase!
A Free Gift with Purchase premium will also be available exclusively to all CBA retailers on street date. Consumers who buy the new DVD will receive a Minnesota Cuke Kids Umbrella sporting the show title and characters while supplies last. The offer will be promoted on coming soon posters and retail floor displays, which will hold the DVDs and gifts.

DVD Synopsis
Minnesota Cuke is on the search for Noahs famous ark when he learns of a mysterious and powerful umbrella  and a clever villain who wants it for his own schemes. Will Minnesota have the confidence to face the challenges and keep searching  or will all hopes of finding the ark be washed away for good?

About CURE International and Big Idea Partnership
Founded in 1996, CURE International is the largest non-profit provider of pediatric specialty surgical care in the developing world, transforming the lives of disabled children and their families through medical and spiritual healing. To date, it has performed more than 54,000 surgeries and treated over 800,000 patients. Big Idea recently partnered in the grand opening of CURE Internationals Childrens Hospital of Honduras -- the countrys first and only hospital that specializes in pediatric orthopedics. The goal of this on-going ministry partnership is to share Gods love with disabled children and their families as they receive much needed care. More information may be found at www.helpcurenow.org/veggie.