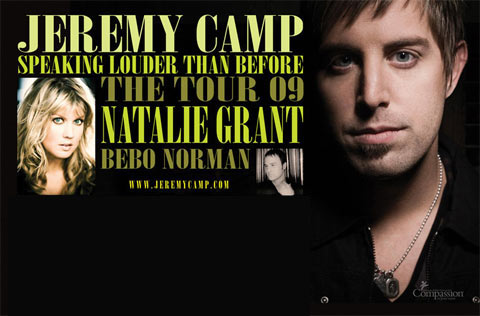 
SEATTLE, WA...September 4, 2009...In one week, BEC Recordings' artist Jeremy Camp will head out on his first headlining tour in two years with Natalie Grant and label-mate Bebo Norman. The "Speaking Louder Than Before" tour kicks off on Thursday, September 10th in Panama City, FL and will continue across the nation until November 21st.

Gospel Music Channel (GMC) is partnering with Camp and this Christian music powerhouse line-up as the official media sponsor of the tour. Gospel Music Channel will promote the tour and present exclusive updates both on-air and online at (http://www.gospelmusicchannel.com). Tune in weekdays from 8 AM to Noon Eastern to GMC's morning show Joyful Noise Café, for the latest news on the "Speaking Louder Than Before" Tour.

As part of a Gospel Music Channel special Labor Day promotion, tickets will be available for $15 beginning on Saturday, September 5th, through Jeremy Camp's website. The $15 tickets will run until Wednesday, September 9th, while supplies last. Fans who haven't yet purchased tickets or those that want to bring a friend can purchase their tickets on Jeremy's homepage.

The message behind this tour is clear: to start "Speaking Louder Than Before." To get fans excited about getting involved locally, there is a local ministry outlet in many of the tour markets with Camp's Speaking Louder Ministries. For example, at the first night of the tour, concert goers are asked to bring spaghetti sauce, noodles, canned fruit or soup to the show for Soaring Ministry Food Pantry. To learn about other opportunities to get involved during this tour, visit the ministry homepage (www.speakinglouderministries.com). This 30+ city tour will make a huge impact in each market and with Gospel Music Channel partnering along with tour sponsor Compassion International, the reach is even greater.

About Jeremy Camp:
Since his debut BEC Recordings' project in 2002 ("Stay"), Jeremy Camp has made a definitive mark in the industry with his ability to compose hit songs and capture audiences of all ages selling more than three million records. Following his Gold-selling debut, Camp has released four additional studio projects, which have garnered a total of three RIAA Gold-Selling albums. With 17 career No. 1 radio hits under his belt, Jeremy Camp is clearly a powerhouse on the radio waves nationwide across all formats (CHR, AC, INSPO, and Rock). Jeremy has the most consecutive No. 1 singles at AC Monitored since 2003 when R&R began their Christian chart. His debut single from "Speaking Louder Than Before," "There Will Be A Day" hit the top on three formats on AC Indicator (16 weeks), CHR (10 weeks) and AC Monitored (6 weeks). Jeremy Camp has also been honored with multiple Dove-nominations and five awards, a 2007 American Music Award nomination, and three-time ASCAP Christian Music Awards "Songwriter of the Year" (2008, 2006, 2005) winner including "Song of the Year" (2006). In 2008, Jeremy Camp was voted for the fifth consecutive year in a row by readers on Christianity Today's music site as the "Best Male Artist."

About Gospel Music Channel:
Gospel Music Channel (GMC) is the nation's first and only television network showcasing the uplifting, inspiring and diverse music that is Gospel/Christian music. Gospel Music Channel is the fastest-growing network in television today and can be seen in nearly 45 million homes on various cable systems around the country and on DIRECTV on Channel 338. This September, GMC celebrates "Gospel Music Heritage Month," honoring gospel music for its valuable and long-standing contributions to American culture. The initiative was created by the Gospel Music Channel and passed by dual legislation in Congress in 2009.