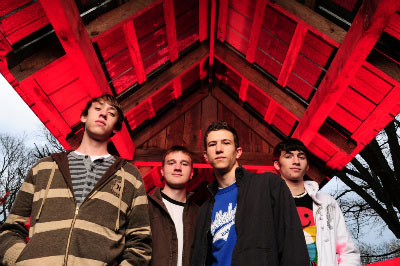 The Tallahassee, Florida-based band has been compared to such artists as Sanctus Real, Relient K and The Afters. But it's not only their sound that draws the comparisons, but the foursome's common goal to impact this generation with the Gospel. Though only in their teens, frontman Forrest Krazit (19), guitarist Joshua Schmidt (17), bassist Nicholas Cleary (17) and drummer Ryan Harvell (18) are clearly on a mission.

We write songs from the heart and our personal experiences of our walk with Christ in hope of connecting and reaching others, reveals Krazit. The theme to these songs is basically the idea that without God we can't do anything, but His love for us is never ending and He always takes us back.

The members of Canopy Red hope to target their peers with this message through their music. Explains Harvell, It's written for Christians, primarily teenagers through young adults. Within the songs, we want to convey God's plans are always way better than anything that the world has to offer.

We always want to draw closer to God as a band, says Schmidt. Adds Cleary, And like our name says, we want to show more people, both saved and unsaved, what it means to live under the shelter of Christ's blood.

Canopy Red has released their debut single Falling Apart to Christian radio, and a music video has been completed, directed by Billy Brown at Evidential Productions (Rush of Fools, Barlow Girl, Richard Marx). The video premiered at VideoRocket.com on September 29th, where it was the popular website's free video download of the week.

Canopy Red will be featured throughout the month of October at HearItFirst.com as part of their month long contest-filled ROCKTOBER promotion, featuring 13 of the hottest Christian rock acts including Canopy Red, Stryper, Pillar, Manic Drive, Dreampilots, SONSOFDAY and more.