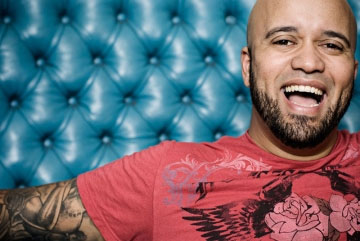 
MOBILE, Alabama (October 23, 2009)  Carlos Whittaker has described himself in many ways: worshipper, pastor, thinker, experience architect, Web 2.0 junkie. Now, he adds recording artist to his life story after being signed to the Integrity Music Label.

Integrity Music plans to introduce Whittaker, who has been a worship leader for more than a decade, through a digital EP scheduled for release in early 2010 with a full album slated to release later in the year.

Whittakers day job since 2007 has been as worship leader for Buckhead Church, a satellite campus of Atlantas North Point Church, one of the biggest and fastest growing churches in America led by Rev. Andy Stanley. He sits on the creative sermon planning team for Andy Stanley and is one of the key planners and teachers for the Catalyst Conference for more than 12,000 worship leaders and team members held in Atlanta this month. He has also advised on programming for the Saddleback Conference and other churches and events in the U.S.

Whittaker has earned a reputation as one of the most transparent and authentic worship leaders in the Church. With more than 20,000 followers on his RagamuffinSoul.com blog and Twitter, Whittaker has harnessed the power of technology and social media to build and nurture community. His fondness for knocking down Christian stereotypes was on full display in his appearance on The Learning Channels popular reality show L.A. Ink, during which Whittaker commissioned a tattoo of Sauls conversion for his entire right arm.

Unquestionably, Carlos has the ability to become one of the most respected and relevant voices in the every-changing landscape of worship music, said Jay King, Vice President of Artist Development/A&R for Integrity. Along with leading worship at one of the biggest churches in the United States, Carlos is a born communicator and his unique and uninhibited style connects with a broad audience whether hes leading from the platform of a church or writing for a constantly growing blog community, all of whom are eagerly awaiting his first worship record.

Whittaker, who counts Keith Green, Rich Mullins, Hillsong and Jack Johnson among his music influences, is working with Jason Ingram, who will produce his debut recordings. He is also co-writing with Mia Fieldes and Philip LaRue.

My life goal is to inspire a movement of authenticity among all generations of Christians that morphs the face of the evangelical church into a place of being real with yourself, others, and God, says Whittaker.

Whittaker and his wife Heather Whittaker make up a blogging power couple in Ragamuffinsoul.com and Whittakerwoman.typepad.com. They have 3 children - - Seanna and Sohalia and son Losiah, adopted from Seoul, Korea in 2006.