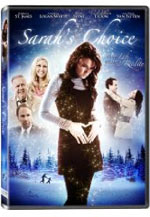 
(Nashville, Tennessee) --November 3, 2009  One of the biggest name artists in contemporary Christian music -- Australian born Grammy Award winner Rebecca St. James, whose record sales have soared into the millions globally, is about to add her first leading role on film to her impressive list of accomplishments.

Her debut lead role is in the November 17th national release on DVD of Sarahs Choice, a faith and values based production with a strong pro life message. The film is being released by Pure Flix Entertainment.

The Los Angeles premier of Sarahs Choice with St. James and fellow members of the cast in attendance is planned at Warner Brothers Studios in Hollywood on Tuesday, November 17th.

The films story line follows a young career woman on the fast track to success in the corporate world when she discovers shes pregnant outside of marriage.

The role is a courageous one for the single Aussie singer who has made her home in the U.S. since moving from her native homeland while still in her teens to find major success in both contemporary Christian music and as a best selling author. St. James has made a consistently bold statement on the abstinence agenda throughout her careera statement that has taken her to the White House, as well as into the broader stage of the national mainstream spotlight for her outspoken stand on faith and values issues facing Americas youth.

Rebecca feels that the pro life message in Sarahs Choice is one that holds promise of helping young women to choose life as the decision of choice in unplanned pregnancy. She was personally deeply impacted by her role in the film, noting in a recent interview: I think the biggest thing the film imparted to meboth in researching the role and in portraying the characterwas a real sense of empathy for women who find themselves in the situation my character found herself in. My heart goes out to them as I have seen the extreme amount of pressure and fear that can come from outside sources at a vulnerable time such as this. Too often, young women choose abortion and subsequently suffer the immeasurable pain that often comes with living with regret and guilt. I came away from the movie with a real passion to positively impact this cycle with the message of Gods heart for the unborn.

In a series of national pre-screenings of Sarahs Choice, reaction to the films message has been consistently powerful. This is a film that delivers the message of Gods love, forgiveness and grace on a subject matter thousands need to see and hearits a movie that every pregnancy center in America should have in their library and consider showing as a special event, noted Bill Donovan, executive directorship member of the CPC Pregnancy Center in Anchorage, Alaska.

The DVD, which features bonus content, including The Making Of, Trailers, and Commentary, will be available at national retail on November 17 from EMI CMG Distribution.

Rebecca St. James will support release of the film with a scheduled round of major national media.