Heath, Leeland with special guest Francesca Battistelli Unite Audiences for Call to Action with more than 1,000 children Sponsored from Tours Partnership with Food for the Hungry 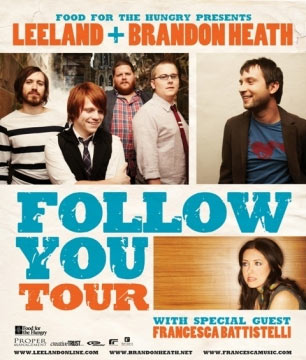 
(Nashville, Tenn.) Nov. 24, 2009  The popular co-headlined Follow You Tour featuring GRAMMY and AMA nominated, GMA Dove Award winning Male Vocalist of the Year, Brandon Heath and GRAMMY-nominated progressive rock act, Leeland wrapped following the final show on Sunday, Nov. 22, in front of an enthusiastic crowd at Samford University in Birmingham, Ala. Rounding out the impressive lineup with special guest Francesca Battistelli, three of the top artists in Christian music today pulled together one of the most successful Christian music events of the 2009 fall touring season, playing to 50,000 fans in 43 cities, and inspiring 1,051 children sponsorships through a partnership with Food for the Hungry.

Borrowing from the lyrics of Leelands climbing radio single Follow You, performed with Heath and currently at No.9 on Billboards AC Indicator chart, the tour aimed to engage attendees with a collective message to love and serve the poor and broken. Each night, Leeland and Heath shared personal experiences of traveling to Cambodia together, and working with Food for the Hungry in sponsored villages earlier this year.

Heath comments, This has been my dream tour, working with some of my favorite artists, Leeland and Francesca Battistelli. He adds, Weve seen many people encouraged and inspired to act and reach out in love. Plus, more than 1,000 children have been sponsored this Fall through Food for the Hungry. We know the lasting result of this tour will be lives that are changed.

Every night on the Follow You Tour has been really special for us, especially, meeting new people and seeing God inspire our generation in worship and action, says Leeland keyboardist, Jack Mooring. Weve seen our fans really step up to the plate and literally change the world by supporting Food for the Hungry. It was an honor to share the stage with Brandon and Francesca every night, and were so thankful for Gods blessing on the whole endeavor.

Margorie Sondermann, promoter of the Zeeland, Mich., show on Nov. 17, notes, Promoting the Follow You Tour with these three breakout artists was a thrill. It was a hot ticket, a sell out in our community, and watching the show left me with an exhilarating sense that we were listening to the next generation of greatness in Christian music.

Leeland, Brandon Heath and Francesca Battistelli hope to continue to inspire Christians to engage actively with the needs of others. We see our calling as a band as two-fold: reaching out to the poor and reaching the up-and outers. Americas a rich nation, but were spiritually poor, explains lead singer Leeland Mooring. We want to see God bring a personal revival in the hearts of Americans and transform our nation.

The Follow You Tour featured new music from Leelands third album titled Love Is On The Move (8/25/09) and Heaths award-winning sophomore album What If We (8/19/08), featuring his current Dove Award-winning Song of the Year Give Me Your Eyes and Christian AC radios recent No.1 song, Wait And See.

About the artists: Nominated for two Grammy Awards, and his first American Music Award this year, Brandon Heath is a respected songwriter and considered a radio hit-maker in the Nashville music community. He first began writing at age 13 and his background is rooted in a history with Christian youth-based organization, Young Life, which is grounded in relationship and mentoring. Heaths hit list includes the 2009 GRAMMY-nominated single Give Me Your Eyes, from sophomore release, What If We. In April, the song was awarded a GMA Dove Award for Song of the Year and spent 14 weeks at No.1 on Billboards Hot Christian AC radio chart, and 27 weeks at No. 1 on iTunes Christian Song Chart. To date, the albums breakout first single continues to lead digitally, selling more than 406,000 total downloads of the track across all digital providers. The second single Wait and See was recently the top song in the country on the Christian AC Indicator chart.

Often quoted as one of Christian musics most gripping live bands, the 2006 debut Sound of Melodies and 2008s Opposite Way quickly established Leeland as a leader in the worship community and beyond. While both previous albums were GRAMMY-nominated and drew a combined eight Dove nominations, Leelands measure of success has always been the human heart. And now Leelands third album, Love Is On The Move is a landmark in the deepest sense.

Featured guest for the Follow You Tour, Francesca Battistelli, received five Dove Nominations in 2009, a remarkable feat for a new artist. Francesca continues to experience chart-breaking radio success, substantial play on popular TV and film and contagious online fan interaction. Its Your Life from My Paper Heart released on July 10 and follows debut chart-topping single, Free To Be Me, which was the first #1 single from a female artist on AC radio since 2005 also ranking her as the most added female artist and new artist in Christian radio history.