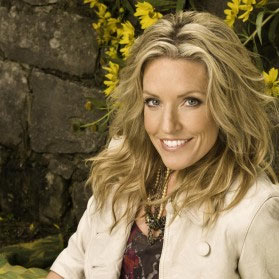 
Nashville, TN  Two is always better than one. Denise Jones, one-third of the Word/Warner Bros. Platinum Selling Vocal Group, Point of Grace, proves this as Nashvilles 94.1 gets back-to-back help from the girls who have taken turns to help co-host at the station while Kim Ford is out on maternity leave. This week (August 9 - August 13), Denise will exercise her radio personality skills as she works alongside Doug Griffin from 6:00 AM  9:00 AM for the Doug and Kim morning show. Shelley Breen from the group was on The Fish last week to help fill in the co-host spot.

The Fish is a part of our morning drive to school and Im really looking forward to hanging out with Doug this next week and chatting about all kinds of things! says Denise. Also, my boys think its really cool that Im going to be on the radio!

Throughout their sensational career, Point of Grace has released eight studio albums including their latest, No Changin Us, which was released in March. No Changin Us, produced by GRAMMY award winner Nathan Chapman, is the groups first album to expand into the mainstream country market - combining their Inspirational roots with a refreshing country sound. Since forming 19 years ago, the two-time GRAMMY® nominees have sold more than 6.5 million albums, won 10 prestigious Dove Awards and earned 24 consecutive No. 1 singles (27 total including radio staples Steady On, The Great Divide and Circle of Friends), a feat unmatched by any artist in any genre.

For information on Point of Grace, visit www.pointofgrace.net.

For information on 94 FM The Fish, visit www.94fmthefish.net.

For more info on Point Of Grace, visit the JFH Artists Database.