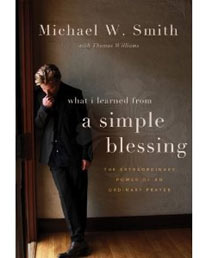 Michael W. Smith
A Simple Blessing: The Extraordinary Power of an Ordinary Prayer

If you've seen Michael W. Smith live anytime recently, there's a good chance you heard the legendary CCM artist speak a unique blessing over his audience. While Michael himself will admit that there's nothing magical about his choice of words, there is purpose behind them and the response Smith has received to his benediction has been overwhelming.

In fact, the reaction to his blessing has inspired the singer/songwriter to pen a new book: A Simple Blessing: The Extraordinary Power of an Ordinary Prayer. With the help of author Thomas Williams, Smith recounts his first experiences with giving the blessing to his audience on a cruise and the powerful response it stirred up. Smith then proceeds to break down each part of the blessing and gives examples from scripture and from his own life to support his reasoning for giving the different parts of the blessing.

A Simple Blessing is written largely from Smith's own perspective and personal experiences. At first, some readers may find Smith's musings a little self-congratulatory for penning such an impactful prayer, but further reading reveals Michael's intentions to be much more; It's a call to action for his fellow believers to realign their world views and restructure just what they deem important in their own lives. As Smith breaks down the prayer of blessing, he encourages the reader to pursue a holy lifestyle (and helps define what it means to be holy) and explains that the secret to living a blessed life lies within how much we give up living for ourselves.

There are six chapters in the 160-page book, and through them Michael tells tales of selflessness and rethinking what constitutes as a blessing in God's eyes. In Chapter 3: "The Prayer For A Pure Mind," Smith confronts the influence of mainstream entertainment and even relates it to his own experiences being a crossover musician. I found this to be one of the most interesting chapters in the book as he describes the dangers of what the world considers "reality" (like how "real" Hollywood tries to portray a corrupt world) and how purity and ideals are really God's originally-intended reality. He even interestingly compares the more pure heroes of yesterday (Superman) with the much darker and flawed heroes of today (24's Jack Bauer) and the dangers of the lower standards of such icons. Through honest commentary on the subject and related ones, Smith makes some valid points that give plenty for the reader to chew on.

One of the biggest upsides to the book is also simultaneously its downside. The 160 pages might not sound too short at first glance, but closer examination of the book will reveal that its smaller size and large, spaced out print stretches what could probably fit onto 120 pages (or even 100?) into a slightly fuller book. However, at the same time, Smith covers multiple topics here without overwhelming the reader, and he does it in a very easy-to-read and easy-to-understand way (but doesn't talk down to the reader either). It's almost like reading from Smith's own personal diary or blog. It's a much easier read and more down to earth than, say, something you might read from a theologian.

Another highlight before the book's end is found within Chapter 5: "The Prayer For Backyard Blessings." In this chapter, Michael tells of how he met his wife Debbie, the blessing that she became in his life and the five blessings they birthed in the years that followed. He makes some great observations about family, selflessness, and how our society encourages a "me first" mentality that goes against everything God wants for His children. It's an equally convicting, touching and encouraging chapter. And like Mary Beth Chapman's recent book, Choosing To SEE, it's neat to hear a personal account of the artist's family and get a more personal look into their lives and heart.

Overall, A Simple Blessing: The Extraordinary Power of an Ordinary Prayer is a wonderful book, especially for fans of Michael W. Smith's work and for those who are familiar with the enclosed blessing. If you're looking for some food for thought about how to look at some aspects of life differently (and maybe even more healthily?), take it from a guy who knows where (and from Whom) his gifts come from and how to get the best out of God's blessings. Instead of looking for how you can be blessed, it's inspiring to hear Michael's insight on how best to bless others. While it may have been nice for the book to dwell on a few topics a bit longer and more in-depth, the short and sweet nature of the book makes it an enjoyable read. It only seems fitting to consider Michael W. Smith's A Simple Blessing: The Extraordinary Power of an Ordinary Prayer a blessing itself!