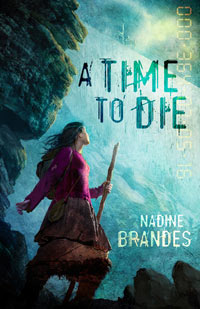 Nadine Brandes
A Time to Die (Out of Time Book 1)

Not every venture into the field of Christian dystopia proves to be an entirely pleasurable one. Granted, dystopia usually isn't pleasurable at all--at least, it's not for the poor souls stuck inside it. However, Christian-based dystopia tends to take a few turns that the genre normally doesn't, and this can either be a very good thing or a very detrimental thing. For those of you who read my reviews whenever they're posted, you know what I'm talking about, but allow me to reiterate briefly: Christian-based dystopia tends to meander and try to discover a story just beyond its grasp, and usually the mini-sermons tossed in only impede the flow of the book when it's very obviously forced. To avoid such turns would be an extraordinary feat in and of itself. Nadine Brandes, a debut author with Enclave Publishing, hits some of these road bumps along the way in her first novel; overall, though, A Time to Die did wrap up its loose ends and prove to be a story that was, indeed, an interesting read.

In the year 2148, the world has been hit by catastrophic meteors, and the United States has split into two countries: the untouched and forbidden West, and the United States of the East (or USE). The notorious and foreboding Wall divides the two countries, and the USE's government has discovered a technology that, at conception, syncs a child with what is known as a Clock, a device made to precisely predict how long someone has to live. A person's Numbers practically dictate their entire life, giving them a year checkpoint to fulfill some of their dreams when they have naught but 364 more days to live. Our main character, Parvin Brielle Blackwater, was born as an unexpected triplet, and when one of her brothers' Clocks zeroed out a few minutes after birth, she and her brother Reid began to share the last Clock, to use the Numbers as both of theirs despite not knowing whose they actually were. The kicker is that the clock zeroes out on their 18th birthday. As Parvin tries to decide how she'll spend her last year, she begins to write a biography, and her request to have a real biographer look at it is granted, sending her life into a tailspin once she needs to have a more adventurous story if she wants to be remembered. More than that, though: It sends her across the Wall, where criminals and Radicals are thrown out to die.

Parvin is a fairly relatable character who's interesting enough, but sometimes her character drowns in the overabundance of description. Moments come about when a certain piece of internal dialogue or some unexpected action really makes her stand out as a brilliant voice; however, I wished for more of her voice, a growing of her character beyond what was given to us. For much of the novel she remains on a strange sort of climb toward maturity, and though the climb stands out, it's staggered and riddled with bumps. Frequent mood swings, out-of-character reactions or responses, lack of conviction until the very last moment--all of these were off and could very easily have been tightened, and they may yet be when the second book rolls around. I found that the other character who held his voice better than Parvin did, even when being nasty, was Skelley Chase. (I have a sneaking suspicion that there's more to Mr. Chase than we're currently seeing, though, which I look forward to deciphering.) Even Trevor, Parvin's mentor, had brilliant moments, and I wished for more of him.

Side characters, in light of this inconsistency, frequently struggled to stand out. Reid begged for work, a little bit of roughness around his edges; Hawke and Jude made interesting additions to the cast, but I kept asking myself if Jude was going to decide what mood he definitely wanted to be in, then the wire came down to his decision, and I was ecstatic at the concrete conviction I saw, despite the outcome. And one brief note here: A character known as the Preacher had incredible potential to be either incredibly good, or incredibly bad, or incredibly aloof and apathetic and kind of a jerk. If anything, he's aloof, and the story simply stretched because of his presence, which didn't really add much to the plot at all.

Sprinklings of purple prose and telltale signs of a debut novel (such as over-described travel or action) landed heavily in the middle of A Time to Die. Description that adds to the story is something any reader absolutely devours when it comes to novels, for what's a novel but a new window through which to look out over the world and wonder at what's shown to us? Brandes used too much of this, however, and sometimes the passages choked on themselves, asking for a little where a lot was given. Other moments gave us not enough when much could have been asked for. For instance, at the city of Ivanhoe, Parvin discovers a fantastic new sort of world and atmosphere that we've not seen until that very moment she walks into the city. The city, and some events that happened therein, could have been richly handed to us on golden platters, aromas of simple prose and to-the-point descriptors wafting up to us like incense. However, such is not the case. For all the forest travel that the book gave us, half of it could have been cut for a more meaningful roundabout in Ivanhoe, a city that offered so much and gave us so little.

As far as plot twists are concerned, there are certainly quite a few. One thing Brandes displays quite well is the uniqueness of setting and the role it plays in determining how a character will react, no matter who they are. Building from this cornerstone, I would suggest that her future endeavors recognize the strength she has here and try to work off that to make character/plot/dialogue/etc thrive under its guiding tutelage. This strength-finding is an essential part of every single writer's career and is no cause for alarm in either reader or writer; it's simply a stage in which to grow.

Alcohol includes the Preacher drinking a glass of wine; this novel has no profanity; for sensuality, I'll label it "half-suggestive" and say there's handholding and one cheek-kiss; violence never goes graphic, but is throughout and includes (but is not limited to) Jude getting shot by a sniper on a cliff, a character's hand being amputated, another character's arm being amputated, some bones and whatnot being broken, self-serve suturing, lots of tumbling about as people fall and get swept up in storms, guns going off more than once throughout, Parvin diving off a cliff, etc.

Summing up all of my editor-brained critiquing, I can't say I didn't enjoy this novel. I recognize and appreciate the fact that this is a debut, and as a hardened writer myself, I can respect any effort on any writer's part to get a written piece of work finished. Dedication and commitment to one single project are really what sort out the men from the mice, so to speak, in the literary world. It's apparent as one reads further and further into A Time to Die that this is indeed a debut, but I mean no malice at all by saying such a thing. We're very obviously meant to reflect and ponder the question, "What would you do if you knew you had one year left to live?" And, really, there's nothing wrong with pondering. However, such heavy questions are not meant to leave us feeling like we've been spoon-fed a story, and while Brandes doesn't exactly do that, the effort to make this stand out as a Christian novel comes across a little too heavily. In the future, it may be wise for the author to consider listening very carefully to her story, for while Parvin had really great internal dialogue when it comes to God, everything outward felt extremely forced. Spreading God is fantastic; drowning readers in communion wine is not. A Time to Die lends itself to be an entertaining and diverting read, and if Brandes continues on a track of growth, I can honestly say I look forward to seeing what the second novel holds.