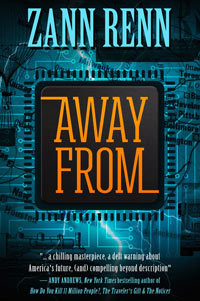 Zann Renn
Away From

As a fiction writer who also happens to be a very devout Christian, I love to watch speculation on future events by way of the fiction world taking a shot and poking some fun around. I've had many ventures into looking at the future via the pages that become windows into the coming years. Fiction is meant to illuminate and shed light on possibilities, and whether or not the discussion circling said fiction deviates into different ideas, all depends on the level of seriousness the author takes when confronting an issue. Here's where the bump in the road comes into play: If an author takes his- or herself too seriously, then that book becomes the future in their mind and no one can tell them otherwise. Fiction is for fun, for fighting civic issues in the name of humanitarian connection via literature, and for finding out how you yourself feel about certain topics/cultures/lifestyles/ideas/etc. The speculative-dystopian novel Away From by Zann Renn takes itself far too seriously, and the effects are seen, read, and felt throughout the entirety of the manuscript.

The book begins with a setup that's quite promising: We have a couple of families in Midwest America that are currently in the midst of persecution by way of what's called the Tolerance Act, where under threat of punishment by the law, no one can express a faith that "leaves others out." Security in this future America is (supposedly) top-notch, and people are tracked and kept an eye on by way of the "chip," which is basically a pet microchip for people. Home churches are discouraged and investigated by authorities if someone makes a report, and lewd things such as pornography and public sex acts have become rather prevalent. Our main character, John Beckett, has a wife and two sons, and once he found out that all federal employees were going to be forced to get the chip, he left his job as a politician and settled for a normal life. At the beginning of the book, John and his wife, Rachel, along with Rachel's sister, Hannah, and her husband, Tim, decide that it's not safe to be in America anymore--let alone Kansas--as pressure from the authorities to get the chip is on. The brood decide to leave by any means necessary. Along the way, we meet many other characters who have either little, different, or no faith at all, and we watch them get swept along in a series of events that lead one to another until they reach the coast. But will they get out alive?

Let me answer that question for you: Yes, they do. However, allow me to back up a tad and start from the very beginning. The thought behind this novel is rather interesting. As I stated earlier, I have no problem with speculative fiction or dystopia; sometimes these two fields hold amazing potential for incredible stories. The problem lay not in the fields of speculation Away From decided to romp through, but the overall execution in the novel as a whole.

To begin, the characters are introduced to us on one plane, and from then on out, the development hitches and delays, giving us starts and stops and backtracks until the characters are about as relatable as boards. For instance, Hannah and Tim are easily the most likeable characters in the entire novel. When they come across a tour bus of Gay Priders heading to a convention, we're served a small nugget of info that Hannah and Tim were professors of acting and theater methodology back in the day, and they use this skill to disguise Tim as a woman so they can travel with the women incognito. To my knowledge, though, this is the first time we've ever heard of them doing anything as advanced as being collegiate professors. How this little nugget of extremely important information got swept to the back burner for that one moment, that one time, is beyond my guesswork, as we see no more of this major development after its use is obviously over with.

Another instance of characters defying their character can be seen in authorities and officials practically skimming the Big Bad not-so-surveillance-reliant government to help our main brood along in the plot. One example that boggles me is when the three-year-old in our brood, Simon, comes down with a 106-degree fever, suffers a fever-induced seizure in the doctor's office, and is given antibiotics and sent on his way with John and Rachel. No self-respecting doctor in his right mind would dismiss a "non-chipper" yelling at a nurse so a child can be seen, and then send that same extremely-ill child on his way because his caretakers are going to miss a train. This lack of consistency can be found in practically every single policeman or watchman that happens along our brood's path, especially when the brood is hiding in a train car/truck/forest/etc. and escape detection every single time by way of happenstance, most often delivered in the form of one authority figure calling out to another.

Happenstance just so happens to be a huge issue in Away From. Every single time--I counted to be absolutely sure--the brood came up against an obstacle, some random, out of the blue happening would swoop in and save the day. Examples: when one of the children are kidnapped by a cult, some of our characters go to rescue him and nearly get caught, if Micah didn't just so happen to show up out of the woods to distract the baddies, but he was hundreds of feet away and had no idea about what was happening to begin with (and all of this happens in about five pages); John, Rachel, Hannah, and Tim need a way to get out of Kansas, so they take flying lessons in hot air balloons, and the weather just so happens to be perfect for balloons every single day they practice and the day they leave; the trucker our brood meets who can transport them from one state to the next just so happens to be a Christian in secret; in Pennsylvania, there just so happens to be an old steam-powered train that doesn't check its empty boxes worth beans, where our brood decides to bed down until they get to a suitable stop point; the family who ran the safe house in Virginia where our brood heads off to just so happens to have had time to hide a spare key in a secret compartment at the base of a statue of Jesus, and lay a secret path to it, may I add, all before being apprehended by authorities and sent to reeducation centers.

All of this inconsistency takes away every single ounce of world-building that Renn tries to establish in her novel, bashing down its own credibility as an eerie and "dystopian" look at America's future more and more with each unbelievable event. If security is supposed to be so high as to require microchip scanning almost everywhere, why is that a problem less than five percent of the time? If authorities are so determined to crack down on Christians and their "non-inclusive faith," why do only four of the characters end up being arrested only once in a 259-page span? Why do random events happen that leave our brood only semi-bothered before deciding to move on and forget it even occurred, such as the very intense sex scene that Hannah stumbled upon in the woods while camping? Why did border patrol simply decide that American ocean borders were of no difference and allow an old ship to sail away from the east coast, laden with fugitives, none of whom had the chip? Nothing in this setting makes any sense at all.

The factor that irked me most, however, lay not in the writing itself. Writing is easily fixed and story tweaked for easy readability and faithfulness to said story. One fact that boils down for readability over every other aspect, even in spite a weak story, is grammar. It is far beyond my comprehension why a woman with a Master's degree in English could excuse such crimes against punctuation-kind. Misplaced modifiers, half-thoughts, lack or overabundance of apostrophes, enough comma splices to shame an electrician and his puny wires, dialogue tags that are not grammatically sound, slamming two characters' dialogue together in one paragraph--all this and more in one 259-page novel. Poor story detracts from interest; poor grammar detracts from everything.

The last point I'll touch on in this review (so as not to overload you, if I haven't already) is the ending. I've been pondering this for just about an entire twenty-four hour period. I still have no idea what I read. I want to say that John had ended up ingesting too much saltwater and had begun to hallucinate, but I know that's only compensation for the lack of sense in the ending. For those of you who detest spoilers, I'll say nothing besides they made it to their destination, and heaven grant eternal glory to the soul who can figure out what that destination was.

Violence in the novel included Isabel attacking a pervert truck driver, some peril at the end when there was a jailbreak, and some violent sickness. Alcohol and drugs were limited to the mention of cold beer, crack, pot, and some other liquor being mentioned. Here's where we get heavy, so hold on. Profanity included 1 cr*p, 7 b*tches, 10 h*lls, 5 d*amns, 1 c*ck, 3 p*ss, 1 N*gger, 1 *ss, 1 sh*t, and (hold onto 'er) 1 F-bomb. Sensuality included kissing, porn being mentioned, The Deed being done publicly in the park, John and Rachel making love, mention of Hannah and Tim making love, and one incredibly intense scene that put some readers off, in which Hannah stumbles upon two men having at a minor in a forest, and the scene is described at a highly non-exclusive level, if you catch my drift.

With a premise that is not new, but with a story that could have made it so, the execution of Away From left readers wanting far more than they were promised, and giving them far less than they expected. Speculation about end times has flown around the airwaves for years and years, and seeing how no man knows the day, I'm all for fooling around with theories, finding situations that could happen and making stories out of them. Fiction is all about "What if." Only, such fiction should never take itself as seriously as Away From, making claims that this is authoritative literature to the point of saying "This is how it's going to be," because if the future is how it looks in this novel, then Christians really have little to worry about when it comes to the ease of escaping the lackadaisical American government. Zann Renn's Away From is not a novel I would recommend, and I advise anyone looking into it to turn the other way and look elsewhere.