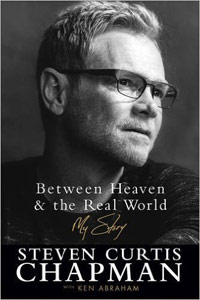 Steven Curtis Chapman with Ken Abraham
Between Heaven and the Real World: My Story

My journey with Steven Curtis Chapman's music began at a young age for me. Over twenty years ago, his music made a tremendous impact on my life as a newborn Christian and a budding fan of Christian music. The first "new" Steven Curtis Chapman album I ever bought was Heaven in the Real World, and I have a vivid memory of sitting on the edge of my bed after an especially tough day in high school with tears welling up in my eyes in response to hearing the chorus, "Where is the hope? Where is the peace that will make this life complete? For every man, woman, boy and girl looking for heaven in the real world." I too wondered often, where is the hope for me?

Over the past two decades, Steven Curtis' music would be instrumental as I went on to college (Speechless), married my high school sweetheart (All About Love), wrestled with any given number of faith tests through the trials of adulthood (Declaration, This Moment), dealt with personal loss in my own life through Steven's own trudging through the valley (Beauty Will Rise) and continued to battle the ups and downs of fatherhood, marriage, getting older and shattered dreams (The Glorious Unfolding). For me, as a music fan and as a fan of Chapman's work since my early teens, a book like Between Heaven and the Real World: My Story is an impactful piece of nonfiction.

Between Heaven and the Real World opens in more recent years as Steven recalls performing at Carnegie Hall as a milestone in his career. He soon takes us back in time to his childhood, giving us insight into his character, how his parents impacted his life, and how he got his start in music with his older brother Herbie. They're all stories I'd never heard before, and Chapman connects the dots along the way from the past to the present. The most interesting segments of the story of his early days to me, however, were hearing how he got started in the Christian music industry, how he started out as a songwriter (which I did know just a little bit about), and how he got his first record deal through Sparrow Records. It's amazing how much the industry has changed from the 80s and 90s to today, and Steven gives us a little snapshot of what it was like to start out in music in a time before MP3s, Napster, websites, smartphones or iTunes and Spotify. The book changes gears a bit when his wife Mary Beth came into the picture, and just like it drastically altered his future forever, it redirects the focus of the story as well. I loved reading about how they met, the obstacles they had to overcome (albeit bittersweet), and their journey from a twosome into an ever-expanding Chapman clan. This book would have meant a lot to read as a teenager, but the impact is huge to me as a husband and father now. I hated reading that they experienced the struggles they had, but Steven's transparency and honesty is so refreshing and encouraging. The book feels very much like sitting and having a cup of coffee with a really, really good friend who just opens the door of their entire heart and life to you.

I remember the day their adopted 5-year-old daughter Maria went to be with Jesus. I remember reading about it online and sitting in a movie theater waiting for a movie to start and discussing the heartbreaking story with my own family. To read Steven's account of the accident firsthand is one of the most difficult things I've ever read -- especially knowing it's all true and actually happened. It's a most affecting thing to read, but having a history of his music encouraging my walk through the years and then reading 300 pages of his life leading up to this part of his story just makes it downright heart-wrenching. I have to honestly say it moved me to tears more than once while reading it. Even more emotionally painful to read is Steven's own honesty about his wrestling with God over Maria's passing. Anyone who's traveled the road of Christianity long enough can relate to the big questions and faith-trying experiences. To hear someone like Steven--whose music has touched so many hearts, and whose music is often so uplifting and encouraging--admit to screaming at God and having considered giving up on life itself at some points in the aftermath of Maria's loss is strangely comforting. It helps the reader realize they really aren't alone, especially not when it comes to faith-shattering doubt from tragedy or disappointment. To imagine the writer of such songs as "The Great Adventure," "Bring It On," "Yours" and "Jesus Is Life" experiencing such incredibly dark times is hard to wrap your head around. Furthermore, the fact this family banded together and was able to stand back up again from underneath the crushing weight of such heartache is an encouragement to anyone deeply entrenched in spiritual warfare of their own. It's a strange thing to feel your heart break and then shortly afterwards feel a boost of courage to persevere mightily.

I read Mary Beth's book, Choosing To SEE back in 2010, but life got in the way of finishing it and getting a review written for it. It was a wonderful book and I found myself relating a lot to Mary Beth's less naturally optimistic view of life. She's more of an introvert than Steven and that most definitely matches my personality more so (I too, like Mary Beth, know it can be a challenge to fight for joy). In reading Between Heaven and the Real World, it was surreal to read the other vantage point of some of the same exact stories that Mary Beth wrote about. It reminded me of the first few episodes of the second season of LOST when one episode told the story of Jack and Locke going down the hatch on the island and then the next episode told the same story from the viewpoint of Kate who went down the ladder first. These two books create a well-rounded picture of the Chapmans' lives and different personalities through things like Mary Beth's struggle with depression early on in their marriage, the road to adopting three little girls from China and the horrific accident.

Steven Curtis will be the first one to admit that he's a talker, so that definitely comes through the pages of his 440-page autobiography. There are a few moments where he'd tell a story and leave it a little open-ended as he moved on to his main, overarching point, but despite making me want to hear more about what happened (like an encounter with his father in the kitchen at a young age, or when Steven and his wife needed to resolve an issue they were having), they're completely minor things in the grand scheme of the book. I also found myself wanting to read a bit more about meanings and stories behind certain songs or behind the scenes on certain albums that were favorites of mine, but given the length of the book already and how much ground he had to cover, I understand why he only grazed the surface of some of these milestones in his career. The things Steven values most of all are his family and his relationship with Christ, so it makes sense that he might not linger on the artistic music-making process of his career (although reading how the album Beauty Will Rise came together, or the surprising troubles behind the recording of The Live Adventure were, admittedly, some of my favorite parts).

Between Heaven and the Real World: My Story is a precious gift. It's for each and every fan of Steven Curtis and the Chapman family's journey through this life, but it's also a faith-emboldening memoir perfect for anyone who needs to be reminded that they are not alone in this difficult faith journey and you can make it through life's deepest, darkest valleys. I can't recommend Between Heaven and the Real World enough.