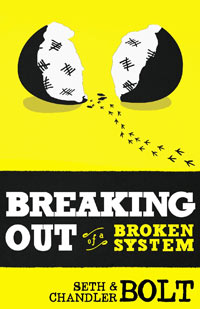 Seth and Chandler Bolt
Breaking Out of a Broken System

What can I say about this book? I laughed. I cried. I even said "Awwwww." And this is a non-fiction How-To manual! Breaking Out of a Broken System is a book written by two brothers (Seth Bolt, bass player for NEEDTOBREATHE, and his brother Chandler, one-time Entrepreneur of the Year) expounding on the fifteen life lessons their parents taught them. These are the lessons that led to their own successes at the ages of thirty and-dare I say it-twenty.

But before you think, Yawn-another bunch-a-guys telling me what to do to get rich, think again. These are guys with solid, inspiring goals, who encourage creative means with which to achieve those goals. They guide the reader to define his or her dreams and develop a plan that will help them get there. It deals with the psychology of success (ie. Limiting vs. Empowering Beliefs); the preparation of success (ie. Ready for Anything); the motivation to succeed (ie. Your Influencers); the business of success (ie. Student Trap, and You, Inc.); and lastly, it even handles the topic of what to do with the fruits of success (ie. Giving). Great life lessons from beginning to end. What more could you ask for?

I'll tell you what. You'd ask for a book that's not only informative, but engaging; check. You might even ask for one that is ADD-friendly; double check. The writing is so down-to-earth you feel like you're chatting with a friend in your living room. The brothers include snippets of their lives. It's complete with examples, fun dialogue, pictures, diagrams, music links and Seth Bolt's amazing (in their own way) stick drawings. What makes it particularly ADD-friendly (at least for this ADD reader) were the little breaks built into the book, where each brother recounts what's happening at the time of the writing. I didn't need to leave my seat for a "brain-fry break" like I usually do while reading non-fiction. It was built in.

Many interesting innovations were employed in the structure of the writing, the layout and the electronic delivery. Given this book is about eliminating unnecessary limits, it was interesting to see the authors live the very things they encouraged the reader to do. First, each brother wrote about the fifteen life lessons in their own section (Seth first, then Chandler). As I traveled through Seth's, I wondered if the last half would feel like rehash; it didn't. Chandler's voice brought a whole new perspective (as a different personality type) that only expanded on Seth's wisdom. Second, Seth's section was displayed as white writing on a black background. My initial fear was that it might strain my eyes, as often happens with websites using like color schemes. I am happy to say it didn't, but I wonder if this is what added the extra file breadth which made the book hard to deliver (more on that later).

Seth, being a musician, included links to the music he listened to (via Spotify) while writing the book. I love this idea, but found the pulling up of a separate web-page a bit intrusive to the read. However, the reader does not have to access these links if they choose not to, and I hope this could lead publishers and artists (with the help of a few techy friends) to work together to perfect a more seamless use of a multi-media approach. It could not only broaden the appeal of a book, it could lead to more innovative coordination and cross-marketing between creatives.

Because many of the above are only more recently possible due to the ever-changing ebook revolution, some of these ideas are brilliant and timely, while others may be just a tad ahead of their time. In other words, technology hasn't quite caught up to it, making it difficult to maneuver through. The file for the book is very large and not easily downloaded to all e-reader devices. In fact, when purchased from Amazon, the reader only receives the first four pages, the last of which directs him to a website where the remaining file can be obtained. When I clicked to download the fully loaded book, it would not come up on my device. Eventually, I gave up and read it as a PDF on my computer. I later downloaded the text-only version and sent it (via Kindle email) to my device so I could finish it on-the-go. However, I missed the pictures and drawings at the end.

My suggestion for the future of this book would be to make available the basic version (though hopefully with low-res photos and drawings included) for immediate delivery through Amazon, but offer the fully-loaded version, within the initial pages, to anyone whose reading device could support it. It's not a good idea to sell something that is not, in essence, complete on delivery when the customer expects it to be. They do promise customer service for those having difficulty, but who wants to be on the phone with a tech when they'd planned to relax and read a book?

Still, initial hazards aside, Breaking Out of a Broken System is a must-read for those just starting out, those beginning again in mid-life, and those who want to impart wisdom to the generation behind them. In fact, I have taken notes for myself and made it part of my thirteen-year-old daughter's summer reading list. I can hear her laughing at parts already.

I hope the Bolt Bros. will iron out some of the technical difficulties in the delivery of this product as well as consider offering it in paperback. I'd love to recommend it to some low-tech friends and maybe even hand it out on street corners, partly because it is just that good, and also because the proceeds go to Palmetto Medical Initiative, a charity with which the brothers (as well as NEEDTOBREATHE) are closely linked. In doing this, the Bolt Bros. again employ the principles taught IN the book through the offering OF the book. Great job, guys!

I would love to see comments below from those who've also read this book to see what innovative elements worked for them and which did not. Who knows, your thoughts could lead to even MORE innovation within the publishing world!

What Connie was listening to while writing this review-Rivers in the Wasteland, by NEEDTOBREATHE.