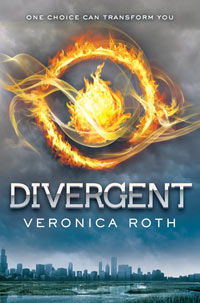 With the release of the major motion picture this week, I thought I would revisit one of my favorite books. Divergent by Veronica Roth is hands-down a decent debut novel. The book skirts into dangerous territory, however-"dangerous" defined here as "haven't we heard dystopia a thousand times". In a way, yes, dystopia always covers grounds that become rather similar after a while and leave us wondering whether or not there is anything original anymore. On the other hand, we haven't heard dystopia like we've heard it in Divergent. Here, the society's set up in five factions, each representing an honorable attribute that they want to embody-Erudite loves intelligence; Amity, kindness; Candor, truth; Dauntless, courage; and Abnegation, selflessness. The last faction's section of the city is where the novel opens, and we discover that our main character, Beatrice, has an unusual trait that could endanger her if she tells anyone about it: She's Divergent, showing aptitude for more than one faction's values.

The novel progresses with a mystery hanging about our heads--why would anyone want to kill the Divergent? The suspense is layered underneath Beatrice's fight for survival when she chooses to leave her faction at the annual Choosing Ceremony and join the Dauntless, the exact opposite of what she's grown up knowing how to live. As she struggles through learning how to fight with guns, knives, and her own fists and smarts, the fact that she's Divergent begins to become apparent. And when those in charge begin to take notice, the trouble only deepens.

Beatrice Prior starts out as a sort of interesting character study. She wants so badly to be selfless like the rest of her family; however, something inside her hates bending to the conformity of not only her faction, but her family's way of being so much more selfless than she is. Many times in stories, we're given heroines who are selfless to a fault and so goody-two-shoes that I wish to find the nearest bucket and evacuate the contents of what I've just read from my memory. Beatrice represents those of us who know that when faced with a decision, sometimes we make the wrong one. Her humanity comes through in every moment, and I loved watching her make bad decision after bad decision. It made me question, "What would I do here?" Unlike other heroines, who are portrayed as being semi-flawed and forced to make "bad decisions" (but not really, because they don't), Beatrice stays human. She makes me sympathize with her. And sometimes that means I hate every decision she makes. Somehow that continues to be fine with me, as it not only demonstrates life in essence, but also life in factuality, as she forces her pride back in order that things may be set right in the end.

Roth's style of writing tends to lean toward the simplistic a great majority of the time, and this is a point where I find myself flip-flopping. On one hand, the style is a direct reflection of what Beatrice has going on in her head. With all the newness of her world that we step into, the style also gives us as much information as we need at one time, which means no second-page backstory and no info-dumping, both of which make the reader feel stupid and bog down the story. On the other hand, sometimes I think a complicated few varied sentence/paragraph/whatever structures could benefit the story as it progresses. The tone and voice need to stay the same, yes, but the variation of structure would reflect better the sort of stream-of-consciousness that Roth applies to Beatrice's voice.

As it is with books that take place at very different time periods-and sometimes in very different worlds-we as readers need information in order to understand what goes in said book, that we may follow and be pleased. Roth's style, while simplistic, allows her enough room to trust her reader to understand the bits of information she gives us at one time. We are never inundated with an info-dump, and the biggest factor here is Divergent is the first in a trilogy. We don't need to know everything about her world at this moment. The first book's plot never needs a mass amount of information thrown our way, and the bits we get are just enough to understand what needs to be understood at that moment, and nothing more.

As a writer myself, I have to give credit for those who survive the long nights and longer days suffering through block after block and wondering why they don't give up, right then, because it would be easier. It would make life that much more simple to slog about in. Despite the simplistic style, Beatrice reminds us that we can't give up. In a way, she represents Roth's own journey into publication. And she reminds me even now that despite hardship, despite obstacles, and despite discouragement that makes me want to throw up, I can't give up. The end result, when all is said and done, is that I'll have said my piece and done the right thing. Divergent may not be an Austen or a Woolf, but the message of hope is clear and needed in such a dark and dismal world as the one Beatrice lives in. What more, as readers and as fellow humans, could we ask for?