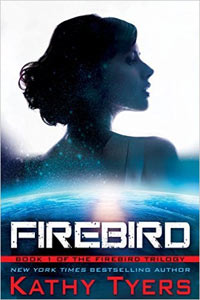 In recent years, a growing number of authors have joined a category of fiction known as "Christian Speculative." This is essentially a lumping of dystopian, sci-fi, fantasy, and steampunk into one category. And as the popularity of this genre is growing, so is the number of authors that write books for it. There are many young, new writers that are looking to get their literary careers started in a genre that inspired them to enter the occupation they are in, all from their own worldview. With this, however, comes a "bandwagon" mentality, with many authors jumping on to a growing trend, some with a passion for it, others simply looking for a fast buck, and still others that know nothing other than writing that which everyone else is infatuated with, leaving their work to be a re-heated version of already overused plot devices, underdeveloped characters, and "plot twists" so obvious, observant readers groan when they see them. But for the Christian science fiction novel Firebird, the context is much different. Originally published in 1987 under Bantam Spectra, re-released under Bethany House in 1999, and eventually resurrected in 2014 by Enclave Publishing, this book has lasted nearly 30 year in a genre built around stories from "the future." So how does this book, written at a time when Christian music was just getting off the ground, George Lucas had yet to ruin Star Wars, and Christian sci-fi was a concept yet to even be conceived, stand up in the speculative fiction world today?

Firebird starts off with an interesting prologue, introducing us to the main character (from whom the name of the book is derived) and a piece of the backstory and setting for the book. It's definitely an attention grabbing introduction that sets the stage for what is hoped to be a fascinating story.

Continuing with the main character Lady Firebird Angelo, we learn that she is a member of the ruling family of Netaia, her home planet. However, as a third child, she is a "wastling." Her fate is that once her oldest sister gives birth to a second baby, she will be sentenced to a suicide mission by the government's military. Author Kathy Tyers does an excellent job of creating this conflict, as well as showing for us the character and personality of Firebird, and how she deals with this both emotionally and physically. At the same time, the plot keeps moving along at an excellent pace.

After an attack on a neighboring planet and a failed suicide attempt, Firebird is captured and interrogated by Brennan Caldwell, a member of the neighboring planetary union known as the Federacy. He is also a part of a telepathic race, known as the Ehretans, whose Hebrew-like history is slowly revealed throughout the remainder of the book. After a number of important events happen, all of which I will not mention in order to avoid spoilers, Firebird finds herself beginning to fall in love with Brennan Caldwell, although she is initially repulsed at the idea of marrying a telepath and participating in their "pair-bonding." Tyers weaves an interesting and natural romance, something I found to be very refreshing given the typical love affairs found in most modern works of fiction, particularly in YA and sci-fi.

The action in this book is excellent. It is well described without being too technical, and it is often told from a consistent viewpoint. In fact, the majority of the book is told from Firebird's perspective, breaking from that only when necessary. This makes for smooth and understandable action sequences, all of which are filled with intense suspense and thrilling fights.

As far as religious elements go, the book follows Firebird's spiritual journey from her doubtful adherence to the polytheistic religion of her home world to the monotheistic beliefs of the telepathic Ehretans, eventually leading to her belief in The Eternal Singer. This progression is anything but forced, and it is honestly one of the most natural conversions I have ever read in Christian literature. At no point does Tyers start preaching at the reader or pause the action to push her message across. Yet, at the same time, she refrains from completely avoiding God or reducing Him to simply another plot device.

Taking the book as a whole, this is quite frankly one of the finest pieces of science fiction I have ever read. And the story is among the best I have ever heard. Many Christian books get so wrapped up in their message that they forget that it takes good dialogue, well developed characters, and a consistently paced plot to create a good story. Firebird nails it on all of those things and more. In every area, from characters, to plot line and action, to dialogue, right on down to its Christian message, Tyers takes science fiction to an entirely new and exhilarating level. This book was like a breath of fresh air from both an oversaturated Christian market and a repetitive science fiction market. As a side note, this book is actually the first in a 5-part series, however it is in and of itself a stand-alone novel. If you are a fan of any kind of speculative or science fiction, it would be a mistake to miss this book. And even if sci-fi isn't your thing, I would still recommend this book to anyone who enjoys a well-crafted story, natural romance, and thrilling action mixed with a beautifully created picture of the mercy and grace of God.