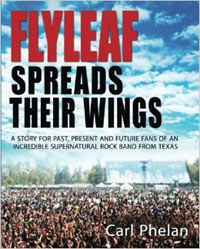 As you know, my dear readers, counting the number of genres circulating in the world of publishing is nigh unto impossible. In all of my wide-fielded reading, this is the first time I've had the opportunity to read the biography of a band, let alone a band so well-known as Flyleaf. Carl W. Phelan-Flyleaf guitarist Jared Hartmann's grandfather-has compiled and amassed a vast collection of reviews, photos, fan love-letters (as it were), tour date lists, and stories from band members and family in Flyleaf Spreads Their Wings. Viewed in this light, this is a book worth reading or owning for any diehard fan who simply must have such an item on their shelf; for the general public, the book offers interesting insight to Flyleaf's history as a band and a unique perspective on the band itself, but largely, reviews and tour break-downs mark the pages here.

The book opens with a short tale of how Jared Hartmann and Sameer Bhattacharya met Lacey Mosley and her friends James Culpepper and Jonathan Smith; this little ragtag group formed the first (pre-natal, if you will) prototype for Passerby, called Listen. Soon after, however, the group formed Passerby, the prototype for Flyleaf. From there, the tours across Texas began, and when the band signed onto Octone Records and took the name by which most of us know them, they achieved monumental success.

Any details, anecdotes, or stories centering around the band members themselves are few and very far between; they don't surface until near the end pages of the book. For the vast majority of its contents, Flyleaf Spreads Their Wings covers mostly reviews given by a large variety of magazines, e-zines, bloggers, and other reviewers who happened to fall into Phelan's collection. As stated earlier, every single tour date is given at the end of each chapter, and photos mark the progress of the band all the way from Listen to Flyleaf. This sort of "illustrated history," as it were, is an interesting thing to note, yes, but one wishes for more substantive material with which to fill pages.

For instance, fan testimonials and reviews could have easily received their own section and left a great space for stories about the band itself. As it stands now, the chapters give a basic outline of the year for the band insofar as tours and possible member switching goes, lays out some reviews for that year, throws some photos in, recaps, and offers the list of concert dates. While this may act as a guideline for lifelong and diehard fans of Flyleaf, the general lack of actual biography for each tour is sure to put off casual readers who are caught by the big red letters on the cover. Even simple epigrams relaying things that happened on tour--interesting adventures or run-ins or something--and cutting out reviews that held little actual sway or say would have filled out this biography and given it that much more life.

The effort to catalogue and record such an exhaustive list of what people--reviewers, fans, bandmates, and family members alike--said about Flyleaf is commendable, and the chance to see its progress from unknown-band Listen to the Platinum-hitting behemoth it became was rather fascinating. Documenting such an archive and compiling it thus may be important for the band as a whole later down the road, and perhaps beyond; who can tell? Fans loyal to Lacey and to the group will ultimately find a gem between the pages of this book. However, for the general public, Carl W. Phelan's Flyleaf Spreads Their Wings is one to possibly check out of a library, should they be so curious.