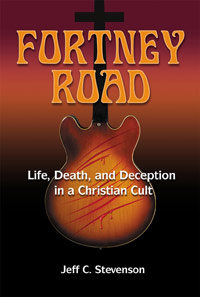 As a writer, reader, and reviewer, I must sometimes choose carefully that which I write, read, or review due to time (or a lack thereof). Nonfiction is a field in which I have sometimes dabbled, but not so far as I have with fiction, making it more of an area I hesitate to touch. And no, readers, this time (miraculously) I do not refer to the world of Christian nonfiction, which encompasses all spiritual self-help and books I generally tend to stay well away from except for this site's reviewing. I refer to the actual and sometimes-journalistic field of nonfiction as an entity in and of itself. Jeff C. Stevenson's Fortney Road: Life, Death, and Deception in a Christian Cult is a journalistic enterprise spanning seven years and many states looking for the untold whole story of Larry Hill's Church of the Risen Christ, a Christian cult that was horrifically skewed, and for all its investigative foray, this book belongs on shelves nation-wide.

Fortney Road covers the gut-wrenching story of Larry Hill's cult in Windsor Ohio: the Church of the Risen Christ living in a commune on Fortney Road. What first prodded author Stevenson into further investigation was curiosity into the All Saved Freak Band, a pioneer Jesus Music effort by Larry Hill and members of his cult. Some people Stevenson talked to about the band reported a "weird vibe" around Larry Hill and some of the music and album liner notes. What Stevenson uncovered was a story covering nearly two decades and tale after tale of enchantment, brainwashing, submission, tragedy, and inhumane abuse.

Larry Hill had dubbed himself a prophet of sorts, and alongside his message of fire and brimstone, hell and damnation, troubled young people in the mid- to late-60s heard the message and took away Christ first and foremost. Converts to Hill's ministry later learned that the Gospel according to Larry did not exactly line up with the Gospel according to Christ; brainwashed and literally beaten into submission as they eventually were, however, it would be years before any of the members snapped out of the trance and walked away from the commune on Fortney Road. Once Hill saw that without fear his converts freely took flight, he hardly had a foothold in making them stay--or return. One can hardly blame them for all the physical, mental, emotional, verbal and sexual abuse they encountered in the Church of the Risen Christ.

As any worthwhile journalist should, Stevenson compiles and corroborates source after source after source to make sure every single facet of his story is the "best obtainable version of the truth," something Carl Bernstein, who worked on uncovering the Watergate scandal, would applaud. At the end of the book, Stevenson explains how he sewed together the entire story from threads handed him at different turns in the path: one interview, outside book and newspaper, correction, and clarification at a time. The effort shows, as each bit of information he gives not only leaves readers wanting to bite the next piece of bait, but proves to fill an important hole in the entirety of the puzzle. This would ordinarily be a no-duh situation, especially when it comes to presenting a difficult story, but nonfiction has a trend to present the facts and nothing but; Stevenson presents the facts and leaves the reader feeling as if the true story just heard must somehow be fiction, the nonfiction here being equally engaging.

Upon observance, this would seem like an odd thing to say about a nonfiction work. However, upon further observance, the crafty methodology Stevenson engages here makes it run like a nonfiction novel. He first presents the story of Larry Hill and how the "prophet" got his start, and this intertwines later with the story of one who would be with Hill's cult for 16 years: Joe Markko. Amidst this careful weaving, Glenn Schwarz, a famous blues guitarist who experiences conversion with a street preacher, is introduced and followed until he too joins the Church of the Risen Christ. Every integral person to the story and every "narrator," if you will, is carefully inserted into the timeline so that every little introduction somehow makes sense, despite the large cast of "characters." Each voice and personality is distinct, and each tragedy that strikes is equally hard-hitting. How Stevenson managed to weave this sort of storytelling into a nonfiction work is a little beyond me, but the success is applaudable.

One other stickler note I made was the grammar here. Unlike the vast majority of Indie and small-house authors I see thrust their selves into the published world, Stevenson manages to maintain a death-grip on correct grammar and readability, something over which I rejoiced heartily. Despite the occasional typo or misplaced comma, which can be attributed to normal misses in proofreading (even big-house novels have these), Stevenson's grammar is spot-on. I cannot describe to you how happily my inner-editor wept over this.

Stevenson makes a point at the beginning of the book that made me wonder a little at first--and a whole lot later--why this story had not been fully exposed to the public as of yet. Yes, when one looks at the facets of the situation, the ex-members of the cult obviously would not want to relive those memories. However, from a journalistic standpoint, I wonder how no one came to be as curious as Stevenson and dig into this "weird vibe" and its underlying, percussive story of terrible loss and awe-inspiring redemption. I have mentioned once before and will say again, that this book belongs on shelves everywhere and should--and must--serve as a reminder to Christians and nonbelievers everywhere not only that the devil "prowls around like a roaring lion, looking for someone to devour" (1 Peter 5:8, NIV) and that he "disguises himself as an angel of light" (2 Cor. 11:14, NIV), but that Jesus plainly stated, "No one can come to the Father except through me" (John 14:6) and for all misled souls, the Psalm 107:2 exhorts, "Tell others he has redeemed you from your enemies." Until the last story of escape is told in Fortney Road, readers will hang on for dear life, marvel at Stevenson's perseverance with such a hard subject, and cry for justice once the last page is turned.