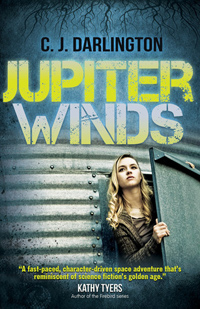 The world of dystopia--and the mixed world of dystopic science fiction--is by no means new territory for the literary market at large, and by no means are they unfamiliar territory to myself, dear readers. What appeared as a trend is now an annoyingly-prevalent formula go-to for any novelist trying his or her hand at the morbid and potentially-macabre. The formula is as follows: take one "evil" government, a hero/heroine that must stand up against an official or something/someone of high importance, an endangered family, some kind of not-so-traitorous traitor, one not-so-loyal defector, and, what some authors decide is obviously necessary, a half-formulated romance. Take all this into account, throw in a couple of "twists" here and there, and the world is served to a portion of dystopia the market has seen time and again. In light of mass-success stories pounding through the celebrity-author scene nowadays, the task of finding a dystopia that at least somewhat satisfies is a very arduous one indeed. In her novel Jupiter Winds, C.J. Darlington manages to add a few different herbs to the mixture and delivers a dystopia that can be considered at least somewhat original.

The year is 2160, and we're first introduced to Grey and Orinda Alexander as they cross the desert on a smuggling run near their home in the North American Wildlife Preserve. The sisters deal with a shady figure named Jet, a man who pays them in silver and food for every illegal and valuable item the girls manage to bring him. The deal goes as planned, but no fewer than twelve hours later, Grey is captured by the central world government, Mazdaar, and taken to the capital for interrogation. The High Council wants to know where her parents are, but since their disappearance five years prior to the start of the novel, Grey and Orinda have never heard from their mother and father. Then the reason for Grey's capture becomes apparent: Commander Evangeline Yurkutz wants Grey not as a prisoner, but as bait; she'll draw out Tanner and Sue Alexander if she has to kill Grey to do so. When Grey discovers her father is alive and living on Jupiter, where Yurkutz is taking her, she makes it her mission to find her parents and save them.

As far as setting and plot goes, Darlington has a knack for bringing these to life. The environments she builds become a real sort of playing ground for the mind to wander through. The desert outside Grey and Orinda's silo-turned-home was realistically described and vivid to the mind's eye; the cells and cosmoships grew into very real places the further I read; and Jupiter's landscapes, weather, and fauna turned to something that could potentially be below the swirling bands of color and gases we in this age can see, but through which we can hardly probe. Even things like the Orion settlement on Jupiter's surface were well-described and alive. Such a gift with setting and place can be extended into every other facet that needs to be developed here; character development is one of these facets, and in Jupiter Winds, it's sorely lacking.

As a writer myself, I understand the task it is to develop a character. However, during the editing phase is when this sort of thing usually gets sorted out: characters develop as the book goes, and once a writer revises the entire thing, the characters' personalities come to the surface as they're poked and prodded into growing over every page. Unfortunately, one thing that Jupiter Winds lacked (and which made the book suffer because of this) was character development. Nearly every character we meet has one dimension--the phase or feeling in which we meet them--and they don't develop further than that. The exception is Dana, who turns her own tide twice in the course of the novel. Grey, Orinda, Mrs. March, Jet, General Yurkutz, even Tanner and Sue Alexander (Grey and Orinda's parents): all of them stay on one plane of existence throughout the entirety of the novel, and that existence is defined by the fact that they're characters in a novel. I had a monumental task of connecting to anyone because they weren't human enough. Skin and bone gave them status as a human; the writer is supposed to give them life as a plausible human being.

Because of the lack of character development, the dialogue suffered. In places, the conversations between characters was disconnected and choppy overall, stiff but not robotic. The characters (especially Yurkutz) also resorted to predictable lines and cliché declarations (especially of villainous intent, or of unshakable goodness). Had the characters been more developed into humans instead of ink-based beings, their struggles and doubts and fights would have been far more effective and heart-rending; for instance, Grey struggles with believing that God really exists at all. This inner conflict could have been explored, expanded, waded through (as it were) until Grey fought the fight herself and struggled into either belief or non-belief. We see one moment at the end where Grey decides that if she's going to die, she may have belonged to God in the first place. The conflict is lost, and so is the possible connection readers could have made with her there. As it stands, I still have no connection with any of the characters within the novel's pages, even after 288 pages of trying my best to feel for them.

The plot moved incredibly fast, and my editor-sense tells me that to make up for the characters' lack of humanness, whether Darlington realized it was happening or not, plot point after plot point was introduced to move the story along--plot points that were never fully developed. To avoid spoilers, I'll keep the list vague: what drones really were; the animals on Jupiter; Mazdaar as a whole; how the present came to be; the Yien Dynasty's endeavors; Tanner and Sue's pasts; how Evangeline became who she was; how everyone knew the Alexander family; inter-planetary travel and what people can do with this; how Mrs. March was involved with the establishment of Orion Settlement; what was happening on Mars. All of this was hinted at and jam-packed into a tight 288-page package. Should Darlington wish to continue the series and explain and elaborate on some of these, I'm positive that readers would be more than receptive to any of these character--and world-developing facets and axes upon which the story obviously turns.

As far as worldbuilding goes, though, Darlington does a decent job. Aside from the half-unrolled plot points stated above, my suspension of disbelief held through the entire novel, which is a massive feat to accomplish with so very much going on. I have full faith as a reader, writer, and editor that if Darlington can build a world that holds my belief suspended throughout, she can develop her characters, get her dialogue sounding normal and realistic, and explore all of the facets she's presented us.

Alcohol and drugs were not present in this book (except for maybe a mention of champagne or wine or something); there was no sensuality; violence included sci-fi type of laser-gun fighting, an attack by animals on Jupiter, mention of blood, hand-to-hand combat, an explosion or two, the mention of bone being sawed into, and someone being tortured by way of electric shock.

As you know, dear readers, I never usually share my reviewing notes. However, I feel it necessary to let you in on my secret notebook for a moment. While reading Jupiter Winds, I came to a spot where despite every flaw and need for development, I made a note to myself that "this book is freakin' cool." Darlington is a writer who has tons of potential, and from what I've read, she certainly has the skill to grow past this and make every endeavor hereafter a shining beacon upon which to look. Should she choose to explore her own talent by exploring her characters on new and human levels, the future work she has in store will without a doubt grow like she never imagined it could. Personally, I look forward to what she has to produce next, and I hope to see more of Grey and Orinda Alexander as time goes on.