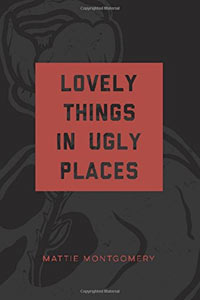 The story of For Today is one of a meteoric rise from another local band to one of the most well-known metalcore bands in the world today. On the heels of their final tour as a band, longtime lead vocalist Mattie Montgomery also announced that he was going to be releasing an autobiography that spanned the history of the band. Lovely Things In Ugly Places is the name of Montgomery's book, and it's chock full of not only the history of For Today, but also display's Montgomery's growth as a man and as a believer in Jesus Christ.

Mattie seems to absolutely fly through his story. He doesn't begin with his childhood, but chooses to begin the story with his time with his former band, Besieged. Not many pages pass before he's taken the opportunity to front For Today, which was, at the time, a small, start-up band from Iowa that nobody knew about. As we read through the pages of this relatively short book, we see that Mattie has taken this opportunity as an author to do what he loves to do most: glorify Jesus. Yes, he touches on life as a touring band (living out of a van, brushing his teeth in Walmart bathrooms, etc.), the thrill of playing a live show for rabid fans, and his family (meeting his wife, having kids, etc.), but a large amount of Lovely Things In Ugly Places centers around the Lord and the things He's done for, through, and despite Mattie. The stories he shares about the miracles he's seen are encouraging, to say the least, and convicting, to say the most. The blind girl regaining sight, the drug-addicted rape victim becoming a missionary, and countless people meeting Jesus for the first time; these are testimonies that God still does miracles today.

As I mentioned, Mattie wastes no time going from the start to finish of For Today, and it makes for a rather short book. The digital version boasts only 128 pages, and that's with double-spaced paragraphs. There's one mention of Facedown Records (For Today's first record label), no mentions of Razor & Tie (their other label), and I don't recall a single mention of any album titles or even song titles. Mattie does go into some stories from earlier in 2016, up until a little after the events of the band meeting that finalized For Today's fate. He even mentions working on this very book, interestingly enough. I was also pleased that he chose to talk about the fallout with guitar Mike Reynolds in 2013, as he concluded it by letting us know that they have since reconciled. There was a lot more to it than I'm sure anyone outside of the band was aware of. As he passes over smaller details about trivial matters related to the band, he provides plenty of moments to thank God for the things he's witnessed Him do. I'd be lying if I said I didn't tear up a time or two.

There are a few critical things to note, which are really all minor; they may not even be critiques. Mattie does write the book from a very personal, familiar standpoint. This is not the work of an accomplished author, but rather, a man of God who wanted to write about his story for those willing to hear it. There are also a couple of moments of "near profanity," for lack of a better term. He describes a shirt he saw at Warped Tour that had a very vulgar phrase on it, though he censors the vulgar parts. Mattie also quotes a French man who used the "s" word, but spelled it phonetically, which just looks like the English word "sheet." It was done for laughs, no doubt, and isn't really offensive at all. Lastly, I was a little puzzled at Mattie's choice to italicize any band name he mentioned. In the end, it's not a big deal, but I found it to be a strange choice.

Lovely Things In Ugly Places was a pleasure to read. It's an encouraging book that is sure to help Christians who have found themselves wondering if God is really real, and/or if He still does what He did in the stories we read in the Bible. This is not, however, a book for the avid For Today fan wanting an in-depth look at the band's history. You will not find tales from the recording booth or details about album sales and relationships with record labels. You will simply find a man and his friend sharing the Gospel with hundreds of thousands of people that may or may not want it, but desperately need it. This comes with a high recommendation.