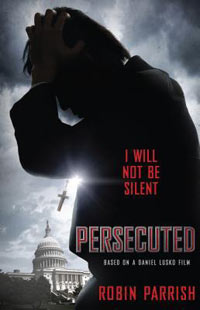 In today's all-inclusive, complacent, you're-okay-I'm-okay world, one finds it rare to see a book stand up for the Christian faith. Christians are pummeled and walked on and knocked down for simply standing up and saying "Jesus loves you," and the so-called Christians out there willing to cut someone's ear off to prove their point give true followers of Christ a bad reputation by a mere label. More than ever we see our own political leaders flip-flopping about issues that may or may not pertain to the church (the Body of believers) and generally not helping the situation by trying to help. The premise of Robin Parrish's Persecuted-the novelization of a film set to release this month on July 18th-attempts to deal with such issues.

At the beginning of the book, we meet a mysterious, obvious "assassin" named Mr. Gray. He takes a job that the reader can instantly connect with the next few characters we meet. John Luther is a mega-preacher who is popular across the entire nation, and we see him in an interview about something known as the Faith and Fairness Act trying to be passed in Washington DC. The reporter asks if he supports this bill or not, and Luther says that he, in fact, does not support the bill. The very same day, his oldest friend, Senator Donald Harrison, asks him the same question and gets the same answer. This sets in motion a landslide of bad happenings that force Luther to go on the run for his life, and he's framed for the murder of a young girl, effectively becoming a fugitive in the eyes of the law. Luther makes it his personal mission to set out and right these wrongs, to find justice for himself and all those cut down in the path of politics, and to return home safely to his family, standing firm by his beliefs and never settling for the watered-down truth.

While the initial premise for this novel is all well and good, the execution comes across incredibly poorly. We open the first pages and begin to wonder if John Luther will be a key political player in shooting down the Faith and Fairness Act, or if that same Act is going to put extremely sneaky chains and leashes on Christians everywhere, thus starting a huge amount of persecution, which is pretty much what the title and blurb promise: extreme persecution, to the point of being almost apocalyptic. However, what we're handed is a tray of half-baked plot and the same premises dancing through every chapter. John is always on the run; his wife Monica is always wondering why he can't just come home, despite the nationwide manhunt looking for him; the Senator is mainly a politico doing nothing; John's father is always dour and somber; Mr. Gray never does anything that he has the skill to do, which is assassinate and completely undermine; and the side characters are as stale as a loaf of bread abandoned in Death Valley for two weeks. The entire story is John on the run and the Act not going through, which in and of itself is a massive problem: We are never, never told what the Act entails. Ever. I got to page 175 and wondered if I had missed something.

Turns out, I hadn't missed anything. The author simply hadn't put the legislation into the story, leaving us watching John Luther working against a ghost of a bill that makes little to no sense whatsoever, because every character in this novel seems to have some sort of different perception on what this bill is. John's right-hand man, Ryan, thinks it's a financial opportunity, the Senator thinks it's his in for Super Senator status, and even the President thinks it's an idea to unify the nation (whatever that means). It's as if every single character put on some sort of rose-tinted glasses that showed them each what their version of the story was, and everything spun around and got smacked together without ever congealing and unifying as a solid novel. We have about five different books in this one thing, and we're not even given the one we're promised because the characters are so unbelievable.

John Luther starts out as a preacher working for the good of his congregation. The Senator wants his way. Monica wants her husband to be home more often. Two FBI agents we meet later, Rivera and Clark, simply want to see if there's something fishy going on with the murder John supposedly committed. All of this is great, for a second draft. A complete novel, however, must display some sort of character development, and throughout the entirety of Persecuted, we're given cardboard cutouts flapping along in the wind, at the mercy of the writer and the reader who has no idea what's going on. For instance, John Luther gets shot near the end of the book, and the bullet goes through his chest, leaving his vital organs injured and bleeding out. He then proceeds to drive a car up the mountain, get out of said car, run for it, and haul himself through the woods to a place where the FBI are converging on his pursuers. Do you think he survives? Yes. Yes, he does. But he shouldn't have. John Luther should have died in his car at the base of the mountain.

The characters remain the only element to be reviewed, as the plot darts in, then out, and never resurfaces. Readers are capable of suspending their disbelief to entertain the thoughts of galaxies far, far away, and magical realms ruled by Lions that can be reached through a wardrobe. But disbelief becomes hard to suspend when belief never gets a chance to cling on. John Luther has one moment where he almost becomes believable-when he's waving a gun at the church board, but even that falls flat when the wave turns into placing the gun on the table and walking away after a halfhearted question of why they went with Ryan's ideas to support the Faith and Fairness Act.

I'm tempted to shoot down this book's claim on the Political Thriller genre. The Act never passes, and John Luther fights against nothing but an accusation of murder. This world, as frustratingly blind as it is, needs stories that deal with real issues and real facts, such as the persecution of Christians throughout the world. That sort of reality can be applied to a future look at America's own tolerance-oriented temperament. Persecuted does nothing to give us a realistic look at the way Christians could be treated further down the road in the Nation Under God, and to sit and claim that such a heavy, real title applies to a novel so full of nothing that I could equate it with a blank piece of paper is offensive to those living in countries where Christians are flayed alive for their faith, as well as to those who are privileged to live in a nation where that hasn't yet happened. We as readers, as Christians, and as humans deserve a thought-out look at the horrors of how violently the self-centered nature strikes out against Christ within us. One man's half-baked journey on the run does not say "persecuted," and neither should the cover of this book.