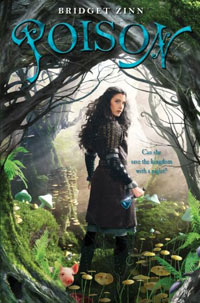 When it comes to most Young Adult fantasy nowadays, you have to be careful what you choose/wish for. I first picked up Poison by Bridget Zinn as a suggestion. The cover was fun and beckoning, and the summary gave me hope for a romp through master potioner Kyra's world. Now, contrary to the adage, there are times in the world of literature that one may soundly judge a book by its cover. I've run into stories that looked good art-wise, but didn't pull through. However, Poison did.

The novel starts where every story should: close enough to the ending to make us want more, but not so far away as to make us bored. We meet our heroine, Kyra, who happens to be a potions genius. The literary market happens to see a lot of "strong" heroines that turn out more superficially so, making themselves appear what they're not. They crack and fall apart at the sight of the first hunky guy and/or bad thing that happens, and they end up being a Juliet instead of an Allison Mackenzie. Not so with Kyra.

Kyra is both sensitive and strong. Where the story picks up, it's her third month on the run from trying to kill the princess, who happens to be her best friend. Kyra saw in a vision that if Ariana got married, the kingdom would be poisoned through her Marital Bond that attaches her to the land, and she would end up draining the kingdom of life. Kyra couldn't let that happen in good conscience. At Ariana's birthday party, Kyra threw a poisoned needle at her...and for the first time in her life, missed. Zinn does an applaudable job pacing the novel; with its short page count, she ran the risk of too much plot and not enough characterization, but Zinn brings everything around to a tight end eventually, making every adventure worth something to our heroes.

Characterization in this novel never falters. Instead of staying unmoving in her feminine strength, Kyra allows herself to realize that Fred complements her instead of taking away from her character, and she allows herself to fully feel for him. And Fred himself is beyond any hero clichés that are easy to fall back on. At first meeting him, one may find him outwardly arrogant. I did, but I was very, very wrong. He's got a permanent smile on his face that betrays his amusement and enjoyment with life all around. He clings to Kyra, which may seem like a bad thing; however, we find out that he was trying to find her anyway so he could follow her to the kingdom and save Ariana from a second attempt on her life. They go together wonderfully. Even Zinn's side characters take on their own lives, however briefly they're introduced. And Rosie? Oh, my. I usually malign animal sidekicks due to their troublesome presence. But Rosie the pig is an absolute gem.

Fantasy novels are known for taking on twists and turns, and sometimes they're not executed as well as they could be. There are moments throughout Poison where I thought I knew what was going to happen. Zinn twisted me around until I forgot my original conclusion, only to miss the glaringly obvious signs that I was right all along! I deeply admire that in an author.

Poison incorporates magic and witches into the plot pretty well. Kyra is accused of being a witch because of her Sight gift (which allowed her to view the kingdom's possible future). However, instead of becoming a witch herself, Kyra decides it's better if she sits back and lets her Sight work itself out. This book does not condone nor glorify witchcraft or anything else you wouldn't want your teens reading about. The magic is used strictly in a fantasy-story sense and nothing more.

There's no nudity in this; at one point, Kyra is forced to cross a river in her underthings so her clothes won't be soaked. Undergarments are all Kyra has to wear with all her other laundry dirty. The description is minimum, mentioning at worst the low-cut chest and bare skin on her thighs. Alcohol is not used nor glorified, but is present. Drugs are not used in this novel. There is violence in Poison, but nothing gratuitous or questionable. Kyra fights some goblins and other creatures. Swordplay is the deepest it gets here, and the only cusses I found were about two "d*mns" and one "h*ll."

The last thing that threw me into this book was the fact that Bridget Zinn passed away two years before this could be published. As a serious writer myself, this shocked me so much I had to sit back and just breathe for a second. Small details that needed polishing can be overlooked because of this. Her technicalities would have gotten better to the point of nonexistence had she lived to write another. I can't in good conscience point my finger because I liked this book so much, after reading it in a day and a half; the next week I bought my own copy, book-plated it, and stuck it on my shelf. Rarely do I find myself sitting back in satisfaction at the end of a book. Poison was one of these books.