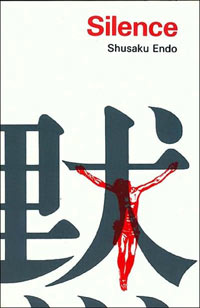 Silence by Shusaku Endo is not a book I would have considered picking up on my own volition. This novel came up as required reading material in one of my literature courses, and part of me dreaded having to read what is now globally considered a massive classic. Sometimes, as in the case of Rebecca by Daphne du Maurier, the classic status is never clearly seen at first and sparks great debate within classrooms and beyond. Add to this fact that Endo's novel deals extensively with the Christian faith and the persecution of Christians, and you've got yourself a huge pot of controversy waiting to boil over. Now I find myself unable to be moved on either point; Silence ultimately has earned its place on my shelf and will never be moved or misplaced.

The novel begins as a metafictional essay on the exploits of the protagonist, Sebastian Rodrigues, a 17th-century Catholic priest from Portugal. He learns of his mentor's apostasy in Japan and ultimately decides to head across the world himself to see if the reports are true. That's the only backstory we get, which is incredibly good for story flow, plunging us into the thick of things immediately with Rodrigues' and his companions' departure. From there, the novel only escalates.

During this era in Japan, the shogun had a massive order out to persecute and even execute any professing and practicing Christians within the country. Rodrigues must navigate this tricky political climate while ministering to the Christians there and discovering the depths of his own faith as he goes along. When he comes to the point of choosing to either apostatize (that is, step on an image of Christ in public recognition of denial) or let something terrible continue to happen (I won't say what, because I want you to read the novel), the struggle he endures still aches within my core.

Characters never run into being someone else and always stay true to themselves, even when you think they'll react one way and go the other. If anything, they take on depths that normally one does not experience in today's mass-market literary style, as quality has slipped and rarely do people attempt to grapple about the most difficult arenas in search of real answers that make one's soul quiver and retreat, shamed that their answers are neither adequate nor profound. Rodrigues and Kichijiro--the Japanese apostate following him--both struggle and search until the answers are so plain--and yet so indistinct--that the reader cannot help but endure the pain along with them, the mere aching of their hearts throbbing up from the pages and the past. At one point in the novel, I became physically ill at the atrocities man is willing to commit in the name of fear: Namely, the fear of Christ.

The Christian faith is never portrayed as anything silly or frivolous. On the contrary, indeed. Endo himself was a professing, practicing Christian who combatted the persecutory nature of his own country. Having grown up in World War II, he witnessed firsthand the horrid, bitter attitude placed not only toward Christians, but toward those deemed inferior and caught in the crossfire. The absolute uncertainty in his own experience translates perfectly onto the pages in Rodrigues' sureness in God, struggle with doubt, constant faith in Christ, and ascension from being more like Paul, to more like Peter. Endo has relayed the perfect story of Christ's sacrificial love in such an impelling, real way, that I cannot fully express to you the immense turmoil he put me through as I read Silence.

The urge to spill the entire story here in the review rises up within me as I type, as I've found such a love for this novel, I doubt I'll ever be able to get the poignancy out of my head or heart or soul. Endo presents us with such amazing and enduring choices and truths that we must acknowledge in our own lives, that I sat back after reading Silence to decipher my own reactions, both externally and internally. I find the difficulty Endo presented so subtle and powerful, one I shall not soon forget, one I shall struggle with the rest of my life, and one I shall pass on to everyone else I come into contact with. This review is the hardest one I've yet had to write, as the truths I saw and felt cannot fully be portrayed until one reads the novel. Please, as soon as you can, pick up Silence and start struggling. You will never regret the immense battle you will fight as you read this--and you will come out all the better at the end.