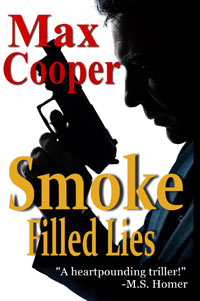 Every so often one finds it very difficult to write a review on something. The reasons for this are quite varied and sometimes may have roots that cannot be plucked up and transplanted. Maybe the series or book has sentimental value. Maybe the book is a classic and one is afraid of being singled out as someone who doesn't "get it." Then one runs into books that one is not quite sure how to review for many difficult-to-identify reasons.

I have no quarrel with honesty; in fact, were it not for honest criticism, I would not be where I am today with my own writing. Every writer deserves to be told the truth, no matter how much it may cause us to grieve the self-image we've built up in our minds. If the critic is neither malicious nor hateful, the honesty, however blunt, will always serve to make any writer think. Today I must wield bluntness.

Smoke-Filled Lies starts out with a couple planning their wedding. We are given the impression that they are both rather young, as they haven't yet completed their college careers. Jessica is studying to be a doctor. Her fiancé Jacob is a student as well, however briefly implied. They are very close to their wedding date, and Jessica has a trip to make into Columbia with an organization called Doctors Without Borders. While in Columbia, though, Jessica is kidnapped, and Jacob must rally his old friends to go after her.

This is where my job becomes difficult. I enjoy a run-and-gun story very much, but I found myself unable to get past a lot of the technicalities here. Words tended to be misused or overlooked, like "steal" instead of "steel" to describe a metal table, or "clinch" instead of "clench" when referring to fists on guns or knives and such. The manuscript also had a lot of grammatical errors that I had to ignore or I never would have finished it.

A basic principle of writing is practicing "show v. tell." This means that instead of saying, "he was angry," you describe what "he" did when experiencing this anger. Did he clench his fist? Clench his teeth? Stomp around and shout? Quick-cut and dry, the action could have been filled out with a lot of showing and less telling.

Another basic principle in writing is that dialogue makes up a massive part of any story. Smoke-Filled Lies leans on it heavily, and not in a pleasing, aesthetic way. I would like to estimate that maybe 10% of paragraphs in this book started without quotation marks, give or take a percent or two. This can be used as an advantage if the plot is 85% character driven, but Smoke-Filled Lies suffered from the waterlogged conversations. Every character had the same voice depending on gender; I found myself unable to keep up with the who's-who and flew through it, which brings me to my next point. I understand that the action genre rarely leaves out stereotypes and clichés, and I quite agree that suspension of disbelief is necessary to every story told in any medium. That being said, the characters in this book became less and less separate people with distinct personalities and more of a super-meld that turned them all into the same person. Incredibly tiny and random distinctions of personality cropped up once in a great while and made it a tad easier, but then the distinction held no immediate or future purpose and the character once again became a lump in the oatmeal. An author should always get to know their characters before publishing anywhere under any medium. If knowing a character means tens of revised drafts, then the writer should buckle down and commit to it. As a writer myself, I understand the obligation to the vision of the story, not the flowing rainbows I try to paint with words. Simplicity, sometimes, can be the absolute best, but only after a writer knows full well who their character is and what they will and won't do. The story's continuity suffered from this as well.

The action genre also has a tendency to whip you around with twists and turns. Smoke-Filled Lies twisted so often that I lost track of what I was supposed to be reading. The plot was that someone kidnapped Jessica in Columbia. We find out she's dead, but then she's actually alive, and then she's dead again, and then she's really alive and kidnapped by a character who was in the story once, for about five pages, for reasons that didn't make any sense with the plot laid down at the beginning of the story. Several characters and subplots had this quality. If the characterization had been developed more fully, I'm sure subtle hints and signs into the past would have cropped up and given us better clues as to what was going on instead of having supposed surprises dumped on us at a whim.

Alcohol and drugs did appear in this. Some characters drank various alcoholic beverages, and some smoked cigarettes or cigars. Profanity happened to be more prevalent than I expected with this. I wanted to write out a list, but I'll save you the trouble and say: it was a lot. Sexuality was minimum. A prostitute appears once, but she does nothing. Kissing is mentioned, nothing further. A man flirts back and forth with a woman using innuendo. The characters are mercenaries; violence plays a large part in this story. While I can say there was nothing gratuitous, you can tell that the fighting is intense whenever it does happen. Also, I don't understand why so many characters ended up dying needlessly or randomly, or even if some died. Jay and Samuel disappeared completely. What happened to them?

As an aside, the silhouette on the cover bears an uncannily striking resemblance to Liam Neeson. After discovering this, I started imagining every mercenary as him. I was thoroughly amused.

One should never blame the editor for mistakes in a story. Contrary to popular belief, they don't have the final say. They give their edits and the writer decides what to do with them. Smoke-Filled Lies can be combed over again before a reprint, and that's what I would suggest be done. The story isn't terrible. It can be done quite well if improvements are made, and I think the writer and publisher both will benefit if they can agree on this. Every story has potential, including this one. Some fine-tuning, some revisions, some slowing down, and Smoke-Filled Lies could find its life.