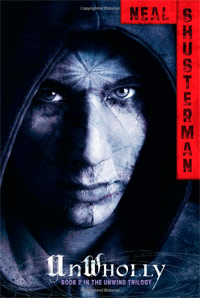 Neal Shusterman's Unwind Dystilogy is a dystopian series about Connor Lassetier, the Akron AWOL. In this version of the future, abortion has been banned after the Heartland War. In its place is "unwinding." Between the ages of 13 and 17, parents can choose to terminate their troubled child's life, 'backdated to 6 days postconception'. The children are then taken to a harvest camp to be unwound. Unwinding allows a person to be legally dismembered and have their body parts used in transplants. Connor is an AWOL- he is a runaway Unwind, charged with virtually everything the Juvenile Authority can throw at him.

This is one of my favorite books. I love the plot, which deals with deception and controversy, as well as adventure. Also, this book is full of surprises, even as I read it over for the third time. I still felt the same tension, the same rush as I did the first time. However, I also noticed the themes a little more as well. I noticed what Shusterman said about human tithing, about honesty, and about what it really means to be human. Instead of the adventure book, full of thrilling escapades, I also now view this book as a moral adventure too, as Miracolina sees that she is still loved by God, even if she isn't tithed. Lev, another tithe, an escaped one, has a similar revelation. During a police visit, he has this talk with Pastor Dan: "As for Pastor Dan, he's a hero to Lev for having the courage to lose his convictions without losing his faith. 'I still believe in God,' Pastor Dan told him, 'just not a God who condones human tithing.' And in tears, Lev asked if he could believe in that God too, never having realized he had such a choice." It is such a strong realization to see how our Christian beliefs could change in the future. Jesus died on that cross so we wouldn't have to. We may take up our cross everyday, but I believe I would be like the kid in the book, Timothy: fearing his own tithing from deep within, despite it being the moment he'd hoped for his entire life.

Then there is Camus Comprix. A Rewind, made of unwound parts. The question surrounding him, a tapestry of humans, is he a being? Can he exist like a human? Right off the bat, it is clear not. But as the story continues, Camus, the character on the cover, makes the ethics behind life complicated. Are you alive? Or are you dead? Another character must explore this, during a period of time where she is forced to sacrifice all of her morals to save her friends from impending attack. These were the two issues that mostly grabbed my attention. This book makes me wonder what it really is to be alive. Although this is not a Christian book, it contains many ideas and theories that can send you scurrying to your Bible. In fact, when given a choice, death is preferred to the divided state, which is being unwound. That is what I love; the fact that you are mired in a moral mystery.

The only drawback, however, is found in the narrative style. It can be just as in your face as it can be elusive. I recall opening the latest addition to the series after not opening a book by the author for almost a year. Until I got my bearings, I asked myself why I even asked for this book for my birthday. The directness is different and I don't know how to feel about it. The exposition is also a little dry and said straight out. Although the balance between direct characterization and indirect is good at times, direct characterization can be a little 'in your face, here it is'. Overall, this is a wonderful book. I would recommend it to mature teenagers and adults with a love of adventure and generally anyone who would like a thoughtprovoking book.