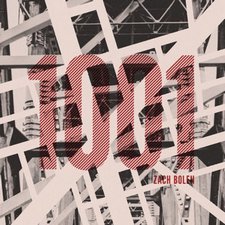 
Earlier this year, Citizens & Saints frontman Zach Bolen released a self-titled, three-song solo EP. The EP was great and showed a different side of Bolen's lyricism; it also served as a teaser for a full-length album. Joining the ranks of the BadChristian roster, Zach Bolen's 1001 is a delightful and surprising rock album that strays from the Citizens & Saints sound in more ways than one.

For starters, this is not a worship album. Bolen does touch on faith here and there, but it's not the focal point of these nine songs. "Give It Time" touches on dissolving bitterness between former friends, and "Without Conditions," though a love song for Bolen's wife, does make mention of their marriage reflecting the way the Lord loves us. Mostly, though, 1001 focuses on a variety of other ideas and subjects. "95" is a fun opener that pulls some pages from The Gaslight Anthem and The Rocket Summer in sound, as Bolen sings about getting away from it all and taking an all-night drive to nowhere in particular. It's fun, energetic, and carefree, but interestingly, it's also a bit of a one-off lyrically, as this is just about the only song that doesn't delve into serious matters.

Most of the songs on 1001 are deeply personal. "Stay Runaway" deals with the fear of losing the woman you love and the uncertainty of whether or not she reciprocates the feelings: "Stay with me here for a while, and let reality pass us by, I'm gonna try to ignore your feet that keep on running, darling, out my door...oh please don't go." Bolen then deals with cutting off the influence of a toxic person in the emotionally-charged "Leave Me Alone." It's not really clear who the song is about specifically, which is probably a good idea, as lyrics like "When you're near, every part of me aches, ain't it clear, I've had all I can take" are on the harsher side. Bolen admits "I don't want it to stay like this," but the other person is unwilling, and he has to cut him/her off. The softer/slower ballad is very appropriate for the lyrics, making it feel easier to relate to and easier to get into the singer's head. One of my favorite tracks, though, is the strictly-acoustic "I Will Let You Down," which deals with the idea of unconditional love between a man and his wife. Bolen is very open here about his tendency to fail his wife ("No matter what I do I'll never deserve your love, I will let you down, I will let you down, but still I'm gonna give everything that I have to you, let me show you how, let me show you how"), but also the reassurance he feels that he's doing okay anyways ("When you hold my hand, I know that we will be okay, even when the hurt takes a bit of breath away, I can feel in my soul everytime your eyes light up, whispers in the wind that this life we have is good enough"). It's a very sweet song, and every married man or woman struggling with acceptance in their marriage should give it a thorough listen.

Zach Bolen's first foray as a solo act is near flawless. Whether he's bringing an Americana-fueled rock & roll sound or he's crooning to the sounds of an acoustic guitar, he's doing it right. 1001 is one of the best rock/alternative albums of the year thus far. With the rumor of a new Citizens & Saints album coming in the next year, we clearly will be hearing more from Bolen soon, but I'm hoping that this isn't the last of his solo work.