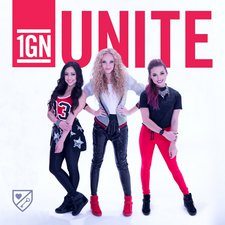 
The last release from 1 Girl Nation (as they were then known) was a big hit in my house, as I have two of their target audience members sleeping under my roof (my two "tween" daughters). It blasted from their rooms, iPods, the family mini-van and the play list before their basketball games. Seeing them in concert cemented the group as a favorite (while adding my lovely wife to the ranks of fans).

So it's fair to say that the follow-up to that self-titled debut album was eagerly anticipated here. Thankfully, Unite, from the group rebranded as 1GN, delivers on the promise of that debut album, and ups the ante with a great mix of club beats, sugary melodies and a generous dose of heart and ministry.

"Get Hype" kicks things off with a club ready beat and various EDM elements stuffed into a rambunctious call to dance and "get up, get down, tell everyone you know." A fierce (and slightly goofy, reminiscent of mainstream artist Nicky Minaj) rap by Carmen Justice Hadley adds a spice to the track, and by the end of the song, audiences will no doubt be dancing away. Continuing the dance party, "The One" channels Lady Gaga, with another infectious beat and an uplifting worship lyric. Worship music done in this style might seem a bit jarring at first, but a shakeup of the worship music formula is a welcome addition to the album.

It's on the third track that Unite really shines. "Cinema" (the original title for this album for a while) shines with an intensity that shows the 1GN girls starting to develop their artistic chops with a driving chorus and a powerful backbeat. "Cinema" is a sophisticated pop song in the vein of a Katy Perry, and the lyrics about the Lord "directing" our lives ("If my life was a cinema did you play the lead? Were you directing me? Did I bring you my life? If my life was a cinema...") spin a useful metaphor for the Christian life and add a depth to the "dance pop" sound of the album.

As a dad, a song like the fourth track, "Guard Your Heart," and the following "No Filter," are a couple of welcome tools in the parenting tool kit. "Guard Your Heart," a song about choosing who and what you give your heart away to, wisely keeps the important and heavy subject suitably light, while pursuing an important lesson for young people. "No Filter" (a riff on the tendency to alter and manipulate photos before posting them on social media) likewise uses its metaphor well (your daughter will understand it immediately) as a challenge to be authentic and embrace who God has created you to be.

The final acoustic numbers ("Smile" and "Unite") end the album well with rousing, shouted choruses and a high "sing-along" quality. The title track in particular scores with a great melody and a driving, organic rhythm.

Unite does what a good second album in any genre should do. It doesn't stray too far from the original formula that garnered them fans in the first place, yet it still shows growth in artistic quality (particularly in the "pop" genre) and performance. Add to this a great heart for ministry and mission, and 1GN has a sophomore album to be proud of.

The self-titled 2013 debut from 1 Girl Nation was hardly the sort of album destined to change the face of pop music forever. That said, despite its origins as the work of a quintet of previously-unacquainted young girls randomly assembled by seasoned music business types, the record turned out to be a surprisingly cohesive, engaging and downright entertaining slice of teen-friendly dance-pop whose ingratiatingly catchy grooves more than compensated for its admittedly inauspicious beginnings. With over two and a half years under their belts since then, the members of the group, now renamed 1GN and operating as a trio, have transitioned from wide-eyed beginners to self-assured semi-veterans, as evidenced by the confident take-me-as-I-am stance of "No Filter," the nimble, rapid-fire rapping of the equally assertive "Haters," and the project's greater overall stylistic diversity as compared to the inaugural release. Poise and eclecticism aside, there isn't a knock-out single on the order of the freshman effort's "Turn Around," and it's hard not to miss the palpable sense of exuberance and awe that permeated the debut. That said, the ultimate decision as to which record tops the other largely boils down to simple listener preference, with both albums offering a veritable plethora of pop-inclined delights for those young (or young at heart) enough to appreciate them. - Review date: 5/27/16, Bert Gangl