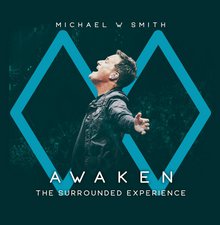 
One year ago, Michael W. Smith released the worship album, Surrounded. That album, his first live worship project in a decade, followed a similar formula to his previous worship releases by including a smattering of Michael's original songs and popular anthems of the time. AWAKEN: The Surrounded Experience is a confusing release as it seems like a live version of a live album. However, rather than being a complete repeat of last years release, AWAKEN takes some tracks from Surrounded and attempts a new blending of todays worship standards.

Unfortunately, the final product feels entirely unnecessary and largely fruitless. It can be difficult to critique this genre of music as people have very different opinions on the purpose and function of congregational worship music, but it must be done to some degree when writing a review for a musical product. With AWAKEN, there is a pleasant emotional resonance produced when listening, but under any sort of deeper evaluation, the content presented proves generally baseless. Worship music is at its greatest when it allows someone to worship in spirit and in truth (John 4:24) by engaging both the mind and the heart. AWAKEN relies so heavily on stereotypical mantra repetition, extended song length, dynamically and sonically identical climaxes, and simple theology that its edification properties are very limited.

That isnt to say that the music on the album is terrible. Partly due to its monotonous nature, there is a cohesion to the album that allows it to flow cleanly through from start to finish. The tracks are composed to get a passionate emotional response from the listener and it effectively does that. Smiths years of experience leading large congregations from behind a piano are on full display. Various featured artists are peppered throughout the album, including CeCe Winans and Madelyn Berry, and their performances further the albums overall atmospheric tone. The problem is that The Surrounded Experience does nothing to stand out from the flood of worship acts that perpetuate the Christian market right now.

With so many great albums in his discography, it is unfortunate that this release is so underwhelming. The performances here create a consistent pleasant aura that could have been so much more powerful if backed by either a deeper musical or lyrical substance. Smitty has the experience and history to powerfully impact the industry in large ways, and that is why this release is so disappointing. Ultimately, while AWAKEN isnt a bad album, it is entirely skippale.