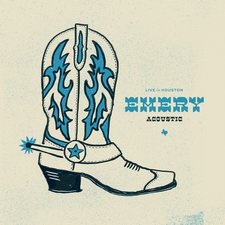 
It's been a pretty big year for Emery. 2015 saw the release of their first post-Tooth & Nail Records album, You Were Never Alone (one of their best), an 8-bit remake of the entire The Question album, and - finally - a vinyl pressing of the original version of that album. Now the band is putting more music in our hands, although, this time, it's in the form of a live, acoustic album. Featuring a full band performance of select songs, Emery's first live album gives me mixed reactions, but overall, it's a great listen.

Most live albums start at the beginning of the band's set and are a full recording of one specific concert. While there have been exceptions to this rule, they're few and far between, and they really aren't preferable when listening to a live album. While all of the songs on Acoustic: Live In Houston are from the same set, it doesn't start at the beginning. In fact, the first thing you hear when playing "The Ponytail Parades" are the words "Alright, let's play another one." Maybe the guys have good reason for starting the recording somewhere other than the beginning, but it's still odd. Furthermore, instead of letting the recorder run and catching the applause and any banter in between songs, it's extremely limited and works more like a selection of songs from what seems to have been a longer performance. The best example of this is the transition between "In A Win, Win Situation" and "Studying Politics," as the former ends and almost immediately jumps into the latter with not even a hint of applause or cheering or anything. It's not really jarring or abrupt, just puzzling.

However, all of that is rather minor, and the banter and crowd participation isn't non-existent; it's just minimal. It's just bread and butter anyways, with the performances providing the meat. The combination of the "live" and "acoustic" aspects was intriguing from the start and is great in application. It gives Emery freedom to experiment with the beloved songs and perform them in a way you haven't heard before and may not hear again outside of this release. Of course, I've already heard two different acoustic renditions of "The Ponytail Parades" prior to this release (both piano and acoustic guitar), as well as an acoustic guitar version of "Walls," the others in acoustic form are made available for the first time. The darker-toned "Can't Stop The Killer" sounds great here, as do the combination of both parts of "Dear Death" from In Shallow Seas We Sail. And if you've ever wanted to hear what Emery would sound like if they were a country band (and I mean, who hasn't?), go no further than "Studying Politics." Yes, it's purposefully sung with a slightly exaggerated country twang, which becomes more exaggerated during the bridge. It's really funny, and it honestly works rather well for the setting.

I find it interesting that there are no songs on this album from We Do What We Want or You Were Never Alone. Something like "I Never Got To See The West Coast" or "Fix Me" would have been great additions. Regardless, the songs that are present were great choices and converted to acoustic (or country) songs perfectly. It also shows that going to an Emery show is a great decision whether they're plugged in or not. Longtime fans will find this to be a great addition to an already stunning discography.

Emery and I go way back. I have been in love with their tunes since The Weak's End came out back in 2004, and to me, they are one of those bands that stay completely consistent when it comes to putting out great music. The music that this band releases seems to only gets better with age. So even though this short, live acoustic EP offers nothing new musically, it is one that I plan on enjoying for years to come, especially at those times when I'm needing an emo fix or want something softer to give me that chill vibe.

The track selection here is pretty on point, though not perfect. I can't really argue that any of the tracks listed should have been omitted, but I'm not in love with this version of "Walls." I mean, some super heavy tracks just need to be left in their superb original state, ya know? That being said, fan favorites like "The Ponytail Parade" and "Studying Politics" are sure to please listeners. I love that both "Dear Death" tracks and "In A Win Win Situation" were included. Each are great tracks that periphery fans may have missed and will hopefully fall in love with this time around. All in all, this is a short yet sweet addition to my Emery collection, and sure to please both current Emery fans and those in need of some emotionally tugging tunes. - Review date: 6/6/16, Kevin Hoskins

Acoustic Live in Houston highlights the intriguingly cryptic songwriting, trade-off vocals, and skilled instrumentation of Emery. The acoustic translations are excellent, breathing new life into these songs while still generally staying faithful to the originals, but the odd approach of putting the tracks so obviously out of order and the lack of any selections from their two most recent releases hinders the album's overall value. Even so, cuts like "In a Win, Win Situation," "Walls" and the over-the-top country version of "Studying Politics" make this a must-have for any Emery fan. - 6/18/16, Christopher Smith of Jesusfreakhideout.com