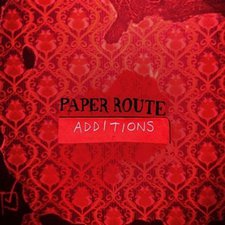 While the title Additions may imply the presence of new material on alternative electropop-rock quartet Paper Route's most recent EP, the release contains only remixes of tracks from the band's outstanding Universal Motown debut, Absence. The remixes are all handled by different artists, and thus are more representative of the remixing artists' abilities and musical inclinations than Paper Route's.

Additions begins with a remix of the originally dance-influenced "Tiger Teeth." Cambridge, MA synthpop outfit Passion Pit strip the song of its oriental-flavored intro and replace it with mildly distorted, climbing, '80s-influenced synths that would at once be at home on a late-'80s Journey, Depeche Mode, or (more recently) La Roux track, nodding obviously to the birth and rise of electronica in decades past while mimicking more recent artists who share Passion Pit's and Paper Route's admiration for the pioneers of the genre. The tempo of the song remains virtually unchanged and the driving beat is left tamer in keeping with the song's original pop bias. The latter characteristic of the mix is disappointing, as the remix apparently seeks to re-imagine the song as an '80s electro-dance romp, but the beat is not heavy enough to lend a legitimate dance vibe to the track. The remix is, however, superior to the original, as the original found the obviously-made-for-dance chorus sticking out like a sore thumb in the midst of driving electro-pop instrumentation.

Son Lux steps up next with a remix of "Last Time," producing the rude, super-low club beat that the preceding Passion Pit remix of "Tiger Teeth" lacked. Lux trades off between clean violin synths and a nearly unintelligible triple-distorted JT Daly vocal track, incorporating hip-hop conventions mixed with experimental sensibilities. The remix has a very improvised, tightly wound feel that is a brilliant change of pace from the '80s dance mix of "Tiger Teeth." Lux drops the chorus of "Last Time" in favor of a few electro-jazz synth interludes laid over staccato club beats. Due to the heavy distortion placed on Daly's vocals, the listener is left to recall the original Absence cut in a new light, examining the message conveyed through the instrumentation and arrangement rather than the lyrics. Son Lux' remix of "Last Time" is virtually an instrumental track, and its uniqueness makes it a highlight of the EP.

Another highlight follows immediately. Darren King (New Orleans-based electronic jazz-R&B-pop-rock band MuteMath's percussion beast) remixes what was arguably the best track to come out of the spectacularly fresh batch of songs that was 2009's Absence. King begins by re-recording the drum track for "Gutter", replacing the original's driving, inspired distorted electronic drums with the brilliant jazz-influenced rock style played impeccably on spare acoustic kits that has become a staple of his own band. Laying this new track underneath some suspiciously Paul Meany-sounding keyboards and a rehashing of the reverb-laced original vocal track, DK essentially turns a Paper Route track into a MuteMath one, with phenomenal results. The remix is not superior to the original by any means, but is different enough to be extremely interesting and enjoyable, especially to MuteMath and Paper Route fans.

Following King's brilliance is Electro-Rock trio InnerPartySystem's drummer Jared Piccone's remix of the flowing, keyboard-heavy "Enemy Among Us." Piccone's remix relies on a variety of ambient sound effects behind swelling synth chords that undergird a vocal track that receives a subtle electronic treatment with changing effects and overdubs that are complemented very well by the underlying synthesizer arrangements. The most endearing part of the Piccone remix is his use of a conventional pop scat vocalization laid underneath the doctored vocal track, adding a fresh and light-hearted touch to the track. The positive and uplifting vibe is an interesting and artistic take on a song that is lyrically inspired by sin and temptation, hinting at the escape from sin that Christ presents to us through His death, resurrection, and invitation to eternal life. Whether or not this was Piccone's message is debatable, but it is certainly a viable interpretation of his remix. The InnerPartySystem remix of "Enemy Among Us is yet another welcome "addition" to the Paper Route library, and holds its own with the tracks mixed by Darren King and Son Lux.

It's always a good idea to end an album on an outstanding or memorable note, so much more so with an EP, as an EP is often intended to keep listeners abreast of a band's future plans and direction. It is here that Additions falls short with a lackluster remix of "Gutter" courtesy of DJ Nick Catchdubs. Catchdubs uses cackling staccato synths paired with a very catchy synth-xylophone beat and places them over an infectious up-tempo drum machine lick to back an almost au naturel vocal track. "Almost" because Catchdubs, committed to his up-tempo beat, speeds up the vocal track to the point that the unnatural-sounding speed of the vocal delivery is distracting and damages the song's accessibility. The fantastic flow of the original (which Darren King managed to maintain in his radical remixing of the same song) is lost in an overly ambitious attempt at totally redefining the song. The choice of featuring two remixes of the same song on a 5-track EP was questionable to begin with, but Additions would have been better served by the omission of Catchdubs' remix of "Gutter."

In sum, Additions is not a great collection of remixes, but the three middle tracks definitely warrant patronizing iTunes or another digital music outlet. For those seeking an introduction to Paper Route, I strongly recommend Absence and the band's 2008 Are We All Forgotten EP.