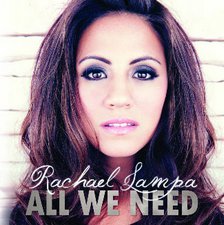 Rachael Lampa
All We Need

For over ten years, Rachael Lampa has been an incredible force in the Christian music industry. With four number-one hits and three full-length studio albums, Lampa's angelic powerhouse vocals have reached many ears. However, it's been over six years since she has dropped a new record. She teased us in 2010 with the seven song EP, Human, but now Rachael Lampa debuts her fourth full-length studio release, titled All We Need.

The album opens with the title track, a blaring pop/rock track that features Lampa belting out "Love is all we need!" over crunchy guitars and a thumping beat, a sound reminiscent of early Rebecca St. James or Joy Williams. Lead single "Remedy" follows the title and flaunts an urban, hip-hop flavor. The song is okay, but it lacks the punch of the album's opener. "Savior's Face" is a light pop ballad that is inspiring and memorable, while "Beauty's Just a Word" is a full-fledged ballad with Lampa's soulful vocals dripping over a soft string arrangement.

"No Escape" is a strange addition to the album, although one of the best. The song is catchy and exciting, but it doesn't gel with the previous songs and makes the listener wonder what musical direction Lampa is trying to follow. Backed by a horn arrangement, the song is a peppy, R&B-tinged track. On the other hand, "Uncharted Territory" is easily the most forgettable and boring song on the album. The lyrics are clichéd and the music doesn't offer anything exciting or striking. However, "Elevate" has a gorgeous melody that fits Lampa's voice perfectly.

"My One and Only" starts out with a soft piano track, then suddenly turns into a dance hall explosion. The song is good, but like "No Escape," it doesn't really fit with the rest of the album. "Run to You" and "Feel" are both tender ballads and serve as the album's closers. The former is fairly uninteresting, while the latter, although beautiful in parts, suffers from switching back and forth between ballad and epic pop track.

All We Need includes two bonus tracks: "Human," the title track from last year's EP, and "Live for You (2011)," a completely re-recorded version of Lampa's first single. "Human" is a beautiful guitar-driven track that features vocals from Johnny Lang. "Live for You (2011)," although more current, fails to live up to the original.

Overall, All We Need is a mediocre album by Rachael Lampa. Songs such as "All We Need", "No Escape", and "My One and Only" are all amazing, but they are all completely different musical styles that don't work well together. As for the rest of the album, there are some gems, but it's mainly a slew of bland pop tracks. Lampa has an incredible voice and has the potential to make another outstanding album, but maybe she should take some advice from fellow musician Charmaine and make a more cohesive record next time.