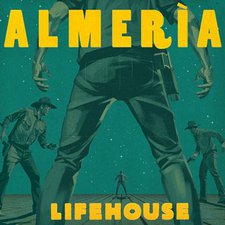 It has often been posited that the music which is truest and sweetest comes from those whose souls are in turmoil. If such a hypothesis is to be believed, it may well explain why Jason Wade and his friends in Lifehouse seem to have connected with so many listeners on such a deep level over the course of their ten-plus years together as a band. Since hitting the airwaves at the dawn of the new millennium with their hugely popular No Name Face album, the alt-pop/rock outfit has made the better part of its bread and butter churning out brooding, angst-filled anthems like "Sick Cycle Carousel," "First Time" and "Halfway Gone," the latter of which found Wade, in characteristically melancholy temperament, declaring "Letting go ain't easy/ I'm hanging on but growing cold."

What an outright surprise, then, to scan the lyrics to the group's latest effort and find the alt-pop unit exhibiting what could arguably be labeled outright ebullience. Indeed, the opening strains of the twang-infused leadoff cut, "Gotta Be Tonight" are loaded to the brim with steady, light-hearted chants of "Keep your head up and move along/ Gotta keep your brights on and cruise along." Equally joyous are the ingratiatingly catchy Natasha Bedingfield duet, "Between the Raindrops," and the arena-ready power ballad, "Only You're the One" ("This is a night like none before/ The band begins/ And it's 1, 2, 3, 4"), which describes an in-concert experience in unmistakably celebratory tones. Even more somber-themed entries like "Pins & Needles" and "Barricade" temper their stark subject matter with equal measures of both determination and hope.

Of course, the greatest lyrics in the world are only so many words on a page without an equally impressive musical section to back them up. To that end, Wade & Co. succeed magnificently. The Eastern-tinged groove and simple, repeated guitar riff of "Slow Motion" is reminiscent of Led Zeppelin's most engrossing folk music forays. The steel guitar and weeping melody line of "Barricade," by comparison, are of a piece, believe it or not, with Glen Campbell's genre-defining country-folk compositions from the late '60s. The lilting, bluesy "Right Back Home," which features plenty of nimble-fingered fret work from none other than '70s guitar icon Peter Frampton, is the absolutely perfect soundtrack for that long drive in the country with the top down. And the bracing noise-and-distortion that ushers in "Moveonday" is exactly the sort of thing fans of the four piece's harder-edged work were hankering to hear during the middle portion of the last decade, when the group was busily putting together adult contemporary-inclined nuggets like "You and Me" and "Whatever it Takes."

All too often, when artists branch out musically or lyrically, the albums that result are scattershot, incoherent affairs that leave the bulk of those who hear them more confused than impressed. Ironically enough, though, while the Almería record is easily the quartet's most eclectic and wide-ranging project to date, it also happens to be its most focused--thanks, in large part, to the aforementioned undercurrent of optimism and resolve that ties its disparate songs so neatly together. In the wildly successful inaugural Lifehouse single, Wade cried out in a plaintive voice that he was "desperate for changing" and "starving for truth." Twelve years and five albums later, it looks as if he might have finally found both.

Surprisingly, it's been nearly twelve years since the hook from "Hanging By a Moment" endeared Lifehouse to so many hearts. From there, the guys released a solid sophomore record, but issues started arising in the third album. It seemed the band shifted focus a bit and their overall sound changed and became softer with it. The group's sixth studio album, Almería, features another shift in sound and the "cowboy" cover art should be a clue. From the opening riff of "Gotta Be Tonight," you can tell Lifehouse is bringing a new sound, and it resonates throughout most of the album. To go along with that sound are also tracks like "Moveoneday" that bring back a little of the older alt-rock sound, and "Aftermath," which features the more recent sound and is one of the prettiest songs they've written to date. While the western flair strikes gold for the most part, the steel guitar in "Barricade," an old school country ballad, can grate on listeners who aren't accustomed to country music stylings. Other tracks of note would be the 80's pop sound (think Phil Collins/Genesis) of "Only You're the One" and the Peter Frampton featured "Right Back Home." This isn't a record you've heard from Lifehouse in the past and it's not one you should pass up. It may take a listen or two to adjust to the sound of Almería, but this is the first Lifehouse album worth getting excited about in a while. - Michael Weaver, 12/17/12