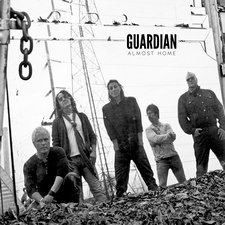 Looking at it on paper, Jamie Rowe and his cohorts in Guardian have been nothing short of prolific during the last decade and a half, churning out no less than ten new records between 1998 and the present day. Of course, upon closer inspection, it becomes all too obvious that the band's output during this era becomes increasingly spotty as time marches on and consists pretty much entirely of tribute albums, live efforts, reissues and the occasional Spanish-language undertaking. In fact, it hardly seems a stretch to say that the lion's share of the band's most ardent fans have been waiting a third or more of their natural lives for the beloved Southern California foursome (now a quintet) to churn out a rightful successor to their last proper studio release, 1997's Bottle Rocket. The good news, of course, for those who happen to find themselves in that particular camp is that the extended winter of their discontent is, at long last, finally over.

After an appropriately-placed audio snippet of a rocket launch countdown, the reunited Rowe & Co. launch into "Boom She Said," a dissonant, fuzz-toned number whose hard-rocking textures and lyrical slant ("Wisdom comes/ She's a lady/ Screaming truth to a world gone crazy") render it a close relation to the equally bracing "Sister Wisdom" from the 1993 Miracle Mile album. On the flip side of the coin, "The Real Me," with its buoyant '70s power pop accouterments, has more in common with, say, Sweet's "Love Is Like Oxygen" than it does either the heavy metal textures of the band's earliest projects or the Aerosmith-by-way-of-Stone-Temple-Pilots vibe of the band's modern-rock-inclined mid-90s works. Not content to ride any given groove for too long, the band follows "Real Me" with "Little Things," an orchestral-based ballad, and the similarly subdued "Wonderful," which would hardly have sounded out of place on your average early '80s lite rock station.

As pleasant as the just-mentioned tracks are - and they are - they still find the band ostensibly either holding back a bit or still trying to shake free of the dust accumulated during the long layoff. To be sure, it isn't until roughly the midpoint of the proceedings, on the straight-ahead rocker, "King of Fools," that the quintet really and truly hit their collective stride. Sounding as if it could have been composed during the sessions for the superlative 1995 Buzz record, the energizing cut has a tighter melody, more impressive guitar pyrotechnics and a higher swagger quotient than the sum total of all six of the compositions that preceded it. Along those same lines, "Paranoia Kills" sees "Fools" and ups the ante; tossing in an even grittier rhythm and a welcome dose of the band's trademark bluesy boogie.

Those songs notwithstanding, it shouldn't come as a complete shock that, for an outfit whose best material has always been built around tasty hooks and underlying tunefulness rather than sheer speed and volume, the group's most sublime moments come when they toss aside any pretensions of rocking out and simply craft shimmering, purely-pop ditties. Indeed, infectiously buoyant entries like "Price We Pay" and "Free" (the latter of which was sent to Kickstarter backers as a teaser prior to the Home's official street date) are the sort of stick-in-your-head ditties most listeners could probably hear once and sing, note-perfectly, from memory two weeks later. Even more remarkable, though, is the slightly-countrified, acoustic-based title track, whose high-lonesome harmonies, gorgeous arpeggiatic fret work and poignant lap steel embellishments (the latter courtesy of Phil Madiera) render it nothing short of awe-inspiring.

In fairness, only a small portion of the remaining material leaves as indelible an impression as these three cuts. Likewise, Steve Taylor's lyrical incisiveness and wit, which permeated the better portion of Bottle Rocket, is somewhat noticeable by its absence this time out, as the mostly routine wording of "Little Things" ("I sit around getting older/ Autumn grows colder/ In my mind") and "California Rain" ("California rain/ Will wash away the pain") attests. And the three short interludes sprinkled throughout the proceedings - a humorous phone message from Gene Simmons during Rowe's London Calling days, an off-the-cuff guitar solo, and a trumpet-based Mariachi-sounding piece - are the sort of offerings most listeners will play once and pass over thereafter. All of that said, the trio of snippets is easily enough programed out or skipped over altogether. In the same way, even without a slew of standout cuts, the release, as a whole, does play fairly cohesively from start to finish. And, despite its intermittent lyrical shortcomings, entries like the title song ("The moonlit sky is calling/ Midnight blue and deep/ But I must journey now/ Miles to go before I sleep") show that the band can be both literate and sublime when they put their mind to it.

As most folks who have followed the group for any length of time already know, the lion's share of Guardian devotees either love the earlier hard rock/heavy metal-based early efforts, and disdain the latter forays into modern rock, or vice versa; and the latest outing isn't likely to replace either of those portions of the back catalog as the new fan favorite. But, even though it admittedly lacks the unrelentingly invigorating nature of early projects like Fire and Love or Miracle Mile; the surprisingly well-fitted alt-rock aesthetic of Buzz and Bottle Rocket; or even the endearing off-the-cuff playfulness of the transitory Swing, Swang, Swung; Almost Home still carries with it the sound of an exceedingly talented set of musicians who refuse to lay down their instruments, call it a day, and go gently into that good night. And it is this very sense of tenacity, perhaps more than anything else, that makes the new album, uneven as it is, such an inspiring late-career triumph.

Christian metal and rock legends Guardian have returned to the scene 17 years after their last, all-new full-length studio album. The band's 1997 release, Bottle Rocket, seemed to be the grand finale for the band, but thanks [again] to Kickstarter, Guardian is back. Almost Home finds the band experimenting with a sound that mixes the hair metal stylings found on Miracle Mile with the more grunge-influenced Bottle Rocket. The overall sound is one that both fans of old and the nineties-era Guardian can enjoy. The music is high energy throughout a good part of the project, with songs like "Boom She Said," "King of Fools," and "Paranoia Kills" highlighting the bunch. Ballads such as the acoustic "Little Things" and "Almost Home," as well as the classic vibe of "Price We Pay," are also solid additions. The Santana-esque "California Rain" is also a pretty nice touch. Unfortunately, the record looses steam with the interludes though. While "Show Us What You Got" features "a bad jam," in the words of guitarist Tony Palacios, the interludes break up the album too much. In fact, "The Calling" completely kills the momentum between high energy tracks. Guardian have released a solid comeback album that leans heavily on their 80's roots; I thought of Motley Crue throughout much of the listen. While old fans should be thrilled, they may find they have trouble relating to a younger audience -- this was actually the subject matter of "The Calling (interlude)" (which was a real call to Jamie Rowe from Gene Simmons about Rowe's side project London Calling). Almost Home is definitely worth picking up whether you're an old school rocker, or just looking to discover one of the pioneers of Christian rock. - Review date: 2/13/14, Michael Weaver

A new Guardian album has been a longtime coming, and while what were arguably the band's best albums found them teaming with producer Steve Taylor in the late 90s, Almost Home sees the guys taking the reins themselves, with the addition of guitarist/producer Jamey Perrenot as a fifth member. Almost Home may not be Guardian's strongest effort in the band's catalog, but it's a breath of fresh air musically in a time when raw rock n' roll is scarce and being far-too-sanitized for radio. "Paranoia Kills" and "Boom She Said" especially stand out, along with the encouraging light rocker "Free." The interludes feel a bit too intrusive in the listening experience, but they also serve as a nod to a time when injecting a little fun and spontaneity between tracks was expected. It's great to hear from these guys once again; hopefully it won't be the last time. - 7/13/14, John DiBiase of Jesusfreakhideout.com

Guardian is finally back for their first full-length album since 1997 (or, perhaps more accurately, since their 2001 Spanish album, Dime), and Almost Home picks up right where they left off. More classic than the decidedly alt-rocking Buzz or Bottle Rocket, Almost Home is a delightful infusion of both sounds as evidenced by the banging opener, "Boom She Said." In spite of regularly poking fun at their ages (as in the humorous interlude "The Calling"), songs like the soaring arena rockers "Paranoia Kills" or "King of Fools," the power ballad "Free," or even the shredding interlude "Show Us What You Got" are Guardian at the top of their game. In spite of some filler ("Price We Pay" and the semi-worshipful "Wonderful" are regrettably skippable), Almost Home is excellent from top to bottom, and few fans will be disappointed. - 7/13/14, Mark Rice of Jesusfreakhideout.com

With an exceptionally strong classic rock vibe, Guardian has burst back onto the scene with Almost Home. The album creates a fun atmosphere, taking listeners back to the "glory days," but with a slightly reimagined sound. Among the best tracks are "King of Fools," and my personal favorite, "Almost Home," with its heartfelt melody and honest lyrics. Other than a few mediocre tracks, Guardian has produced an exceptional album that is a must-have for fans of classic rock. - 2/7/14, David Craft of Jesusfreakhideout.com