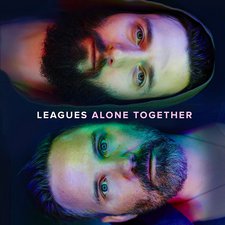 
As any performer who's being completely honest with themselves can tell you, the search for perfection can be something of a double-edged sword. On the one hand, the stubborn refusal to settle for anything less than utter and absolute brilliance has produced its share of universally-lauded landmark albums (e.g. Stevie Wonder's Songs in the Key of Life). On the other hand, though, many a persnickety creative type has found that the passage of extended periods of time only serves to blur their once-sharp vision along the way, resulting in works that, even if they'd been released hot on the heels of their predecessors, would still likely have been dismissed as sub-par (Chinese Democracy, anyone?).

Thankfully, for Thad Cockrell and Jeremy Lutito, the three-and-a-half-year gap between their full-length debut, 2013's You Belong Here, and the present project was a case of making an already-good thing that much better. Indeed, while scrapping all but four songs from an already-completed version of Alone Together and basically starting over from scratch could well have stretched the patience of a relatively young fan base to its breaking point, one would have a hard time arguing with the way their latest record finally turned out. "Lipstick Coffee" kicks off the proceedings with a slow, funky, thick-as-molasses vibe and classic '70s soul-inflected backing vocals that combine to render it an irresistibly catchy success. Elsewhere, the delightfully buoyant "Greedy Man" serves up a hearty helping of breezy, sunshine pop sure to overpower the resistance of all but the staunchest of nay-sayers. And the best-of-album closer, "Walking to a City," which sounds like an Owl City cover of a '60s Western movie theme song, ends the proceedings on a gloriously unanticipated off-kilter note.

A careful listen to the lyrics shows the duo to be every bit as clever, word-wise, as they are instrumentally. The brutally honest "New Money" ("I wanted to tell you a joke and make you laugh/ Instead of seeing me / But ... all I got is me") perfectly expresses the undergirding sense of inadequacy and fear that so many romantic couples feel, but so few are able to convey. On the other side of the coin, the beautifully poetic "Carry Each Other" ("I can tell that you are lonely/ I get lonely, too/ Some days, it's just a passing cloud/ Some days, it never moves") brings a poignant strand of hopefulness and resolve into focus amidst a backdrop of isolation and despair. And, in a bout of consummately-delivered irony, the most eloquent moment of "New Language" arrives at the very instant its writer admits that such absolute and perfect articulation of his deepest sentiments lies just outside his grasp.

In fairness, the musical portions of "New Money" and the prototypical, dance-floor ready "Alone Together" aren't nearly as distinctive as the first few selections on the record. And entries like "Slow and Steady" are a bit too lumbering and repetitive for their own good. That said, for the most part, Cockrell and Lutito manage to tiptoe their way around any such unwieldy musical morasses. And, as is the case with so many albums, back-half compositions like "Steady" and the title cut inevitably suffer in comparison to the opening tracks simply because they happen to sound similar to that which has already been played. Indeed, taken on their own merit, more than one of the closing numbers would probably stand a fair shot at becoming a winning radio single.

The 2015 departure of Tyler Burkum (formerly of Audio Adrenaline), who handled guitar duties on You Belong Here, is likely at least partially responsible for Together's blunted rock inclinations and heightened electropop leanings -- an aesthetic that represents just enough of a departure from Belong that some existing fans may find themselves less than enthralled by it. It also bears noting that the lyrics to songs such as "Lipstick Coffee" ("I kissed what I could kiss / I felt what I could feel/ She left me at the gates of Heaven/ I did not get in"), "Dance with Me" ("Touch me/ Catch it in your hands while you can/ Come on, baby, try it") and "Young Lovers" ("Young lovers' hands/ They can't stay away"), while certainly open to a variety of interpretations, might nevertheless come across as a bit too sensual for the average Inspirational Pop listener. That said, in the end analysis, even with its musical left turns, weaker material, and ostensible lyrical earthiness factored into the equation, Cockrell and Lutito's most recent effort still remains, at its core, a quirky, eclectic, feet-tapping triumph.