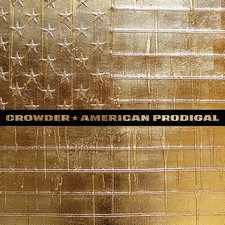 
David Crowder's fledgling solo era under the "Crowder" name has been a rousing success, with 5-star Neon Steeple producing hits and Neon Porch Extravaganza capturing the essence of the band's live show.

Crowder's second studio album, American Prodigal, is a musical progression from "folktronica" to "swamp pop," and it's a straightforward examination of the problem of sin and the promise of heaven. The album wears its theme on its sleeve, following a sinner in need of rescue. In the "Intro," he's pleading for angel choirs to join his song of deliverance. By the "Outro," he's back in communion with God. In between are songs of sin and struggle and forgiveness and freedom. The thread is so consistent that some song titles wind up in other song's lyrics. Only once, really, does a song stretch beyond the fundamental issue to provide a bit of societal commentary, when "Prove It" addresses both metaphorical and literal slavery.

At the risk of gross oversimplification, David Crowder's music can be sorted into three categories. There are the worship songs, dating back to Baylor University and the reason Crowder started a band in the first place. Think "Everything Glorious," "How He Loves" and "Come As You Are." Then there are the foot-stompers, the self-described hoe-downs and banjo-plucking party songs that draw from Crowder's Texas roots. These are often covers, including concert favorite "I Saw the Light," and sometimes lean heavily toward guitar-driven rock ("Lift Your Head Weary Sinner (Chains)"). Finally, there are the quirky songs, the inventive ones that include keytar or megaphone or lyrics from the most abstract corners of Crowder's remarkable brain. American Prodigal is an outstanding collection of songs from the first two categories, with a notable dearth of quirky loops and head-spinning lyrics. The worship songs don't sound distinctively Crowder-esque, but they're finely crafted and will resonate with a whole bunch of prodigals. More prolifically represented is the hoedown/rock song grouping. As "Shouting Grounds" declares, "It's gonna get loud."

If the volume is a bit surprising, it is not unwelcome. The guitars are unleashed to fine effect on several songs, including the lead single "Run Devil Run" and "All Your Burdens." The rappers who would occasionally guest in Crowder's live sets are given studio space this time around, and while it's not an entirely original feature, it works. These songs will play well in concert, and the recently announced pairing with Tedashii on Crowder's tour is prescient.

When the album's not rocking, it's spinning big worship anthems that will also work well live (notably, the Ed Cash-produced "My Victory" and "Forgiven"). The "big worship anthem" has become a cliché, but Crowder is such a strong artist that even when he's following formula, he can create a song I want to listen to over and over. CCM single "My Victory" is a good example. It's tailor-made for both radio and a Passion conference, which are phrases sometimes used sardonically, but it's a great song. It's also worth noting that another worship song, "All My Hope," belies the CCM formula in favor of a gospel piano that takes the listener straight to a Sunday morning with a swaying choir, hands high in praise.

Prodigal is a solid offering, and Crowder remains fixed as one of the genre's finest. However, there are moments on the album that sound a bit derivative, and I never thought I'd use that term to describe any David Crowder music. I can't shake hearing P!nk's "So What" when I hear the beat driving "Prove It." "Shouting Grounds" has the stomp-stomp-clap from "We Will Rock You." Scattershot percussive "Hey!'s" are used to decent effect, but that's a production trend that waned not too long after the Lumineers hit it big. These are minor faults, and they're probably only noticeable because Crowder has set the bar so high with a rich history of inventive, original work.

Perhaps related to this quibble is the feeling that the album stays on a short leash. The quirky songs are missing, yes, but more importantly absent are the obtuse metaphors or lyrics that give pause to ponder. The biggest exception is a treasure on the deluxe edition called "Praise the Lord", written by Sean McConnell. The lyrics are as honest as they are profound, and the song grabs the listener from the opening: "I used to shake You like an eight ball / I used to shoot You like a gun." It sounds like a classic Crowder lyric, even though it's a cover.

American Prodigal tells an old, old story, and while it's not Crowder's most creative offering, it takes an important place in his remarkable catalog by alternately cranking up the volume and showing how good a worship song can be.

The name of David Crowder has become deservingly associated with a hoard of words seldom used to describe the music created to worship. Eccentric, daring, creative and revolutionary are a few that come to mind, but one I've never paired with Crowder's music is ordinary. American Prodigal, Crowder's second solo effort, can be a little too colourless at times, but in most part, it successfully steers clear of any form of mediocrity. Although the album takes a more straightforward approach compared to the electronic flavoured Neon Steeple, it does attempt to shake things up from time to time. "Run Devil Run" is as catchy as a song can get (despite its repetitiveness) and "Shouting Grounds" is an excellent barnstormer of a song. On occasion, the album tries too hard to be different when it simply doesn't need to, such as the out-of-place rapping in "Prove It" and the overly chaotic nature of "All You Burdens." It feels more disjointed than creative. Contrasted with this are tracks that aren't as musically engaging ("Back to the Garden" and "Promised Land"). Compared to what American Prodigal does right, however, these uncommon missteps don't hold a candle. The narrative of the prodigal son spread throughout is exceptionally well done, and the album's back half (from "Shouting Ground" to "American Outro") is all around brilliant. In the face of its flaws, American Prodigal is a record well worth your time. - Review date: 9/23/16, written by Lucas Munachen

With a mixture of folk, pop, hip hop, electronic, Gospel, and even some Native American chanting, Crowder continues to prove his skills at genre-bending with American Prodigal. Calling his latest concoction "swamp pop," his second solo album delivers 14 boot-stomping and praise-filled tracks that will have you bobbing your head and singing along in no time. - 9/17/16, Christopher Smith of Jesusfreakhideout.com

Since his debut with his former band, it became increasingly apparent that David Crowder would be one of the most creative minds in the worship music department. His solo debut in 2014 continued that legacy, and he's attempting to do so again with American Prodigal. Having listened to Neon Steeple plenty of times, and enjoying it each time, it becomes a little disappointing to hear that American Prodigal doesn't leap forward as much as I had anticipated. "Run Devil Run" is a very poppy, southern rock sort of track, "Forgiven" is the big worship anthem that was clearly made for radio play, and Crowder brings an odd amount of hip hop to the scene. The gimmick of featuring big name Christian rappers on a worship album was very played out after only hearing it a couple of times (Passion did it, Chris Tomlin did it, etc), so KB and Tedashii don't really do much for me in this setting. Interestingly, even Crowder himself adopts a bit of their brand of rap style in "Keep Me," as he semi-raps a couple of times. However, I feel like the album is heavier on the bluegrass and southern rock sound more than Neon Steeple, as "Keep Me," "All You Burdens," and "Shouting Grounds" will attest to. American Prodigal is not Crowder's best work to date, nor is it really close, but it is a good album. Even on a bad day, Crowder's music will seldom be not worth listening to. - 9/17/16, Scott Fryberger of Jesusfreakhideout.com

Crowder is without a doubt a veteran artist and has a somewhat mythos about his very being. Usually his art is deeply intelligent and mildly ambiguous; whimsical yet grounded; approachable yet urges caution. American Prodigal does not fit that. Overall, I feel like this is a collection of coasting songs. He's got plenty for people to love and enjoy; as a matter of fact, I think people are going to go absolutely bonkers over it. There's so much to applaud about this album! It's definitely worth listening to. But it's like seeing a tamed lion at a zoo; or better stated, like listening to CCM radio. Nevertheless, David Crowder on his worst day is better than most on their best. I just hope we all get the chance to see Crowder unchained once again: to see the beast released back into the wild, striking fear into the hearts of radio-friendly artists who live to write what sells. I look forward to seeing that day. - 9/23/16, Ryan Barbee of Jesusfreakhideout.com

Crowder has proudly embraced his role as a novelty in the world of Christian music, but his work with DC*B never felt intentionally novel. I thought Neon Steeple did, and it kinda bugged me. American Prodigal also feels novel, but it overall strikes me better than Steeple. True, a lot of this music is more traditional-sounding worship (with a solid Crowder flair, which makes it good), but Crowder's experimentation with strong, hip hop-esque beats (and even his rap on "Keep Me") make this album rise above either the novel or the typical. But without a doubt, the album's finest moment is the purely irresistible "swamp pop" number "Run Devil Run," one of the most fun tracks Crowder has ever made. I maybe could have done without the guest rappers (an increasingly common trend on worship albums), but I don't mind as much since guest rappers have long been a part of Crowder's live act (and he was one of the first worship artists to do so). Listeners should expect goodness and fun, but perhaps not brilliance. - 9/24/16, Mark Rice of Jesusfreakhideout.com