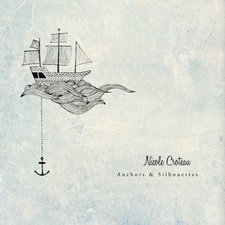 There is a dichotomy that comes with listening to new artists: There are the artists that are completely out-of-the-box original and then there are Christian translations of mainstream artists. This is always a gamble, but one that must occur. In the case of newcomer Nicole Croteau, on her album Anchors & Silhouettes, there is an noticeable battle between the original and the copycat.

Beginning the album is the acoustic-pop "Falling." It contains all of the elements that have made mainstream acts like Taylor Swift and Miley Cyrus popular over the past few years. The problem that seems to come to the surface is that it's difficult to determine who Croteau is singing about as she sings, "In your presence is where I need to be, cause that's where I'm complete. Baby, I can never let you go." While the first part sounds like she's referring to Jesus, I'm not sure "baby" is a name He tends to go by (This is a major problem that I see appearing in even popular worship songs now as lyrically they don't differentiate from popular love songs. Just add Jesus to a love song and it can become a WORSHIP SONG try doing that with the next Bruno Mars single). This same love song approach is also found in songs like "Sacred Romance" and "Butterflies;" they don't seem to really echo the scriptures but because they sound like they could talk about Jesus, they're considered Christian.

On a happier note, the instrumentation on a number of the songs is at a very high level. Croteau's utilization of acoustic guitar, glockenspiel, and banjo really give songs like "Storyteller" and "Amazing" an excellent sound. But random interjections of speaking, and an unclear direction in regards to genre, make the songs lose a good bit of potency. Any moral or inspirational point seems to get muddied by the lack of clear direction.

Throughout the album there are glimpses of greatness as Croteau's pop melodies are very catchy and her use of vocal harmonies is executed wonderfully. Nevertheless, the lyrics seem to be the normal "sellable" sound. Young teenage girls might find this album attractive and at the very least it contains positive and moralistic virtues of love from the first to last song. Nevertheless, at this point, Croteau's sound seems to be an attempt at a "Christian" Taylor Swift. However, that's not to say that there is no potential; this is not the last time we'll hear of Nicole Croteau. I'm sure that with some time we will hear some great things from her in the future.