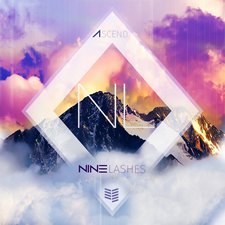 
Nine Lashes used to be known for their powerful messages and hard rock anthems, but that is nothing close to what can be found on their new album, Ascend. Instead, the band takes a new direction with electronic music, an emphasis on repeating lyrics, and little substance.

The album opens with "Heartbeats," which reminds listeners through catchy lyrics and an electronic beat that everyone in the world is connected and the same underneath. The melody is infectious, and it's a decent beginning to the album. Unfortunately, it doesn't get much better afterwards. "The Chosen Ones" has a promising start, with a soft guitar and strings, with lyrics like "We were made to fly in a burning sky...keep on rising from the dust." The chorus, however, is the downfall of the song, with the track's title repeating constantly to the point of redundancy. "Glorious" is a standard worship song, backed by a steady drumbeat. The lyrics express how God has rescued us and how we should worship Him for everything He is. While it's a good message, the track won't be winning any points for creativity, as it pars with many of the corporate worship songs in the industry.

It is easy to tell that the band is not entirely comfortable with this new direction, as the music is not fully polished, and the tracks never stray from the what has already been done many times over. Throughout many of the songs, the lyrics are used as fillers and are repeated several times, to the point of annoyance. Most of the time, Jeremy Dunn's singing seems disconnected and not completely invested in the music, with the only notable difference being the cut "Stolen." The emotion portrayed in the chorus of this song as he expresses his desire to turn away from the world and follow God is the most sincere on the record.

Nine Lashes has changed their sound and their focus for their new album, transitioning from a legitimate rock band to an electronic/pop band with eleven radio-ready tracks. Though the record offers nice messages, there is nothing new or exciting to be found. Fans who have been following Nine Lashes from the beginning will most likely be disappointed by this addition.

Nine Lashes is the latest Christian band to abandon their rock roots in favor of a radio-ready pop sound, consequently leaving behind the depth and intrigue that made them such an exciting band. All is not lost though. Despite the vocals not fitting to this style of music and the instrumentation sounding somewhat generic, Ascend is still a decent listen. The varying sub-genres are a big reason for this, with the album boasting a blend of radio-friendly CCM, dance-pop, and electronic pop with an 80's flair. Aside from the anthemic electronic soundscapes on "Brand New Life" and "Eyes On You," this is mostly new territory for the band. Ironically, the CCM songs "Glorious" and "Stolen" are two of the more interesting tracks of the bunch. On the worshipful "Glorious" the piano intro paired with Jeremy Dunn's peaceful vocals immediately grabs your attention, while "Stolen" is infectiously cheerful. But even at these best moments the songwriting doesn't have as much depth as the band displayed just two years ago. Nine Lashes will lose many fans over this change and it is unclear how many new fans will be drawn to this new sound given how oversaturated the Christian pop genre is. - Review date: 3/6/16, Christopher Smith

Ever since their independent LP release in 2009, Nine Lashes has continued to grow in popularity and develop their melodic style. Generally speaking, this transition has run along the rails from edgy rock to pop/rock over the course of three albums. Although there were a few hard-hitters on 2014's From Water to War, no such tracks are to be found on their latest release, Ascend. Gone are the fanciful guitar riffs, growling vocals, and provocative lyrics. In their stead are the all-too-common pop/worship stereotypes and a more generic lyrical content. All in all, Ascend isn't a bad album. Within its genre, it's actually quite fantastic and listenable, which helps raise the bar for the rest of CCM. That much being said though, we can hope that this album will be looked at as a one-off experiment and the rockers will return to what they do best next time. - 2/24/16, David Craft of Jesusfreakhideout.com

Nine Lashes started as a modern hard rock group but have been on an evolutionary journey, musically speaking, ever since. From Water to War showed a move towards the pop/rock and worship sound, but Ascend abandons the hard rock sound completely with the majority of the album being pop. While some of the sounds are pretty typical of today's pop scene, overall, the fact that the band consists of real musicians who write their own music makes it stand out above much of the general pop masses. More worship oriented numbers, like "The Chosen Ones" and "Glorious," absolutely steal the show though. Those looking for a riff-driven Nine Lashes record may want to harken back to World We View, but those interested in a more intelligent pop experience may find a lot of enjoyment with Ascend; it will definitely be a matter of taste. - 2/29/16, Michael Weaver of Jesusfreakhideout.com