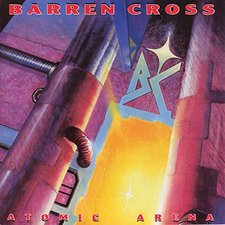 
Despite its undeniable growth in popularity over the previous decade and a half, by the mid-1980s, Contemporary Christian Music was still, by and large, a niche market populated by performers who were signed to Christian labels, toured with other Christian acts and whose product was sold almost exclusively in Christian bookstores. A small handful of artists, such as Amy Grant or Petra, did manage to secure deals with mainstream record companies. But even those fortunate few still simultaneously retained the services of their CCM-based labels for product promotion and distribution within the Christian marketplace.

All of which only serves to make the Barren Cross story that much more noteworthy. After releasing an independent EP in 1985 and their first full-length outing, Rock for the King, the following year on the Starsong Communications imprint, the Los Angeles-based four-piece decamped completely from Starsong and signed with Enigma Records, home to mega-popular groups like Ratt, Poison and Motley Crue. As it turns out, the gamble was a successful one. Their debut Enigma single, "Imaginary Music," was placed into heavy rotation on MTV, and the project from whence it came, 1988's Atomic Arena, released to glowing reviews, leapt over long-established artists like Ted Nugent, David Lee Roth and Aerosmith in the rock/alternative radio trade papers, and eventually went on to be named the #11 Christian Metal album of all time by Heaven's Metal magazine.

Listening to the third effort, even all these years later, it's easy to see why it took off the way it did. Hard-driving, yet eminently melodic, cuts like "Deadlock," "Imaginary Music" and "King of Kings" were absolutely on par with, if not superior to, the average offering from late '80s pop-metal mainstays like Warrant, Winger and Dokken. On the other side of the spectrum, tracks such as "Killers of the Unborn" and "Cultic Regimes" find the spirited SoCal quartet pulling off speed and thrash metal in most convincing fashion. And, to top it all off, the band even managed to incorporate the occasional epic, progressive-leaning passage into numbers like "Living Dead" and the equally winning "Close to the Edge" without seeming either forced or gratuitous.

The themes presented on Rock for the King were almost exclusively spiritual in nature, covering topics such as divine healing ("Just a Touch"), Christ's return (the title song), and the universal need for salvation (virtually the rest of the album). For Atomic Arena, however, the band opted to address what had ostensibly become a significantly larger audience. While entries like "Heaven or Nothing" and "King of Kings" continue to travel along the straight line laid out by the unmistakably Biblically-themed material on the previous release, the remainder of Arena finds the foursome broadening their scope to take on issues ranging from abortion ("Killers of the Unborn") and suicide ("In the Eye of the Fire") to substance abuse ("Deadlock") and false religions ("Cultic Regimes").

Their more eclectic nature notwithstanding, Atomic Arena's lyrics, like those of the two projects before it, remained something of an Achilles heel for their authors. To be sure, cuts like "In the Eye of the Fire" ("Let all your feelings come out/ Scream them out loud you can shout") and "Deadlock" ("Deadlock, you're dead/Deadlock, you better give it up instead/Deadlock, deadlock, deadlock") could probably be considered rudimentary, at best. Of course, the true impact of any set of heavy metal lyrics arguably lies as much with how they're delivered as it does with what they actually say. To that end, the BC collective succeeded magnificently, thanks, perhaps more than anything else, to front man Mike Lee, whose sturdy and invigorating singing voice shows an uncanny resemblance to those of both John Bush (of Armored Saint fame) and legendary Iron Maiden vocalist, Bruce Dickinson.

Lee and his cohorts would go on to generate only two more studio efforts, 1989's State of Control and Rattle Your Cage a half decade later, before deciding to call it a day. While both of those were certainly solid and engaging undertakings, it was nevertheless Atomic Arena which would remain the band's high-water mark. For the 2020 re-release, the folks at Retroactive Records have remastered the original ten-track album to give it a heightened clarity and impact, cobbled together 16-pages worth of rare and hard-to-find photos, tossed in newly-written liner notes from label owner, Matthew Hunt, and limited the new pressing to a total of only 1,000 units. All of which, combined with its considerable historical significance, serves to make this impressive re-issue of an already-beloved classic a virtual must-have for those in the hard rock and metal-loving communities.