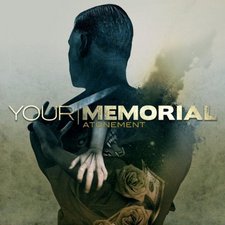 Your Memorial is yet another new signing for Christian metal leaders Facedown Records. Their ten-track label debut, Atonement, looks to gain some national attention for these up-and-coming Minnesotans.

Unfortunately, if I had to describe Atonement in one word, I would pick "bland." Unlike with many other new metal bands, this album is not mind-numbingly boring and repetitive. However, it is also just not all that interesting. The vocals are about as generic as they come. They're comfortable and familiar, and probably wouldn't have drawn my attention if it weren't for the fact that everything else about the album is pretty generic as well. Instrumentally, there is rarely a whole lot going on. The guitars are appropriately crunchy, but the band spends way too much time on simple grinding chords. Even that wouldn't necessarily a problem if the rhythm of the tracks was compelling, but once again we're stuck with pretty average drumming. There's simply no one element of the music that stands out and demands attention.

That being said, this isn't a bad album. As I said before, this is comfortable music. The band has a tight sound that is well executed, albeit not very inspiring. And occasionally Your Memorial succeed in breaking out of some of their molds. The title track features some interesting drumming and a little bit of rock influence. "Surface" is one highlight, a track with a more cohesive structure and some solid clean vocals in the chorus, while "Unseen" deserves attention for some creative guitar work near the middle of the track. At the same time, there are tacks like "Desolation" and "Surrender" which are pointless, drab instrumental interludes that completely interrupt the album's energy.

If you don't demand that your metal be very creative or groundbreaking, Atonement is a pretty solid album. It's certainly not some of the best metal we've heard this year, but it isn't the worst either. For a major-label debut, Atonement is at least satisfactory.