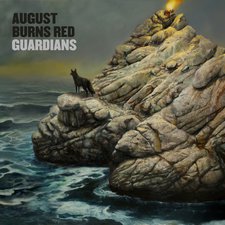 
"Take another look around / There's so much lost to be found / People everywhere are hurting / Even though they're counted out / There's so much lost to be found." August Burns Red had no clue what environment or context they'd be releasing their new music into when they recorded Guardians in 2019, but essentially all of the art, entertainment, and media that's arriving in mid-2020 is being reinterpreted by the COVID-19 pandemic, offering us either a way to cope or a way to be distracted from the pain, fear, and paranoia that surrounds us all. Oddly, these days of quarantine have resulted in a notable decrease in music consumption (purchasing, streaming, etc.), when it's albums exactly like Guardians that could be helping so many people in these dark, confusing times.

"The Narrative" blows the doors open with what might be the band's heaviest track across the past few albums, furiously pounding through blast beats, memorable chants, and ABR's signature flow of tempo shifts and time signature changes. Later tracks, such as "Ties That Bind," display how streamlined their particular brand of chaos is, maintaining ABR's status as the metalcore genre's most uplifting artist, carefully crafting wild mixtures of drum fills and guitar riffs that congeal into a strange yet sincere beauty. "Empty Heaven" also impresses, with its gang-vocal chorus that's nearly guaranteed to become a live staple. What's most striking about these songs is how frequently they are limited to the basic instruments that the core band members perform (electric guitars, bass, drums), in stark opposition to the instrumental variety that became the band's late-career trademark, starting on 2013's Rescue & Restore. However, that which was so refreshing became an eerily calculated formula on Rescue's follow-up, which makes these songs sound more like an inspired return-to-form rather than a retreat or retread.

Lyrically and thematically, the album follows suit with the band's past output. While "Bones" is ostensibly about assimilation and gentrification, lines like "We built this new resistance / To help keep our distance / Don't feel bad for us, we are content / In this new existence" feel tailor-made to be interpreted as being about the pandemic and quarantine circumstances into which this album has found itself. Yet, whether a song is addressing the abuses of media, the power of honesty, integrity, and standing up for one another, or victims suffering from misdiagnosed medical conditions, there is plenty of comfort and hope to be found amidst these eleven tracks. And even though I tend not to be a big fan of this band's lyrical style, there are moments that hit with immediate and undeniable power, like in "Defender": "Righteous wrath, wrapped in empathy!"

The songs on Guardians don't contain "clean" singing, per se, but the band does lean into choruses more frequently than usual throughout the album, with lead vocalist Jake Luhrs and bassist/backing vocalist Dustin Davidson growing in their abilities to scream melodically, resembling bands like Architects, The Ghost Inside, and All That Remains, with the chorus of "Lighthouse" playing as a dead ringer for While She Sleeps. (And that's not a bad thing -- "Lighthouse" is an absolute highlight.) Yet, rather than making the band less distinct in their sound, these elements show how August Burns Red are able to gently expand their sound without tampering with its integrity.

Consistency has been the name of the game for ABR since first arriving on the scene with 2005's Thrill Seeker, giving fans an album every two years, featuring the same five members as far back as 2007's Messengers. But it was 2009's fan favorite Constellations which truly solidified the band's staying power, such that the guys decided to end their perfect run of album-every-other-year in favor of dedicating 2019 to touring and re-releasing Constellations. But perhaps it was that focus on older material that inspired the back-to-basics aesthetic and style of Guardians, which confidently affirms that the band doesn't need any studio gimmicks or unexpected instruments to still write an album's worth of top-tier metalcore. The verdict is still out on whether this album is better than 2017's Phantom Anthem, but for a band with such a lengthy and prolific career, being consistently great is just about as wonderful as getting better with each release. In other words, there are no diminishing results to be found here.

For their 8th studio album, August Burns Red is pulling out all the stops. Guardians is fast and furious and exactly what fans have come to expect. It may not have as many out-of-left-field musical moments as albums prior, but the technical musicianship and intensity are still there by the bucket-load. Guardians is another solid entry in ABR's discography. - 4/3/20 Scott Fryberger