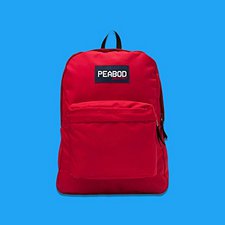 
Centricity Music's resident happy-hip-hopper PEABOD has been following up last year's debut album, Healthy Snacks, with new singles throughout most of 2019. His latest single, "Backpack," joins four previously released singles to form a new compilation EP, Backpack - EP, which is currently available on all digital retailers. In fact, with each subsequent new single, Centricity has lumped them all together for a new digital EP release. While it makes it easier to make sure you're not missing a thing, keen eyes from faithful listeners will notice that the EP merely gets expanded and repackaged with each new addition.

I've covered one of these singles individually, but the main focus here is his latest, "Backpack." Featuring Marty from Social Club Misfits, the new single is a more earnest rap track with the fun and joyful PEABOD touches we've come to expect from the young artist. Lyrically, the song celebrates the 'broke emcee' lifestyle, with the chorus, "You don't need a lot to make a dope track, I don't even need hands because the beat's slapped / Spend your dollar, homie, that don't guarantee jack / Everything I need can fit inside my backpack." The funky beat and slow rhythm fits nicely with Marty's relaxed verse, making for yet another solid single. Most of PEABOD's songs point the listener to Christ or reference the Christian lifestyle in some regard, but this time, the focus is kept lighter and on the hip hop lifestyle, which works especially fine within the context of the surrounding songs.

The EP's tracks are ordered chronologically, which positions the somber but highly relatable 2018 single "Antisocial" as the opening track, followed by the fun and inclusive "Left Out" (featuring Unspoken's Chad Mattson); the latter of which would have been a much more appropriate start to the EP. My personal favorite, "Side Hustle," which finds PEABOD sending out encouragement to anyone trying to make their dreams a reality, is next, followed by his previous new single, "Hoodie," a love song he wrote for his girl (who he recently married). This EP's title track wraps things up nicely, closing out a really strong collection of positive and (mostly) upbeat hip hop songs.

If you've yet to give PEABOD a listen, his Backpack EP is the perfect starting point. It's a collection of his latest work and easily some of his best songs to date. (And according to Amazon, it is releasing on CD in late September.) I've really enjoyed hearing each new track as they've released, and I'm excited to hear what he's cooking up next.