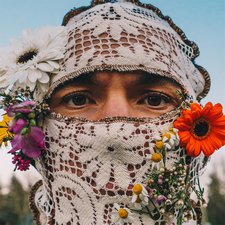 
Whether you like their music or not, its hard to deny the creativity of Kings Kaleidoscope. The pandemic forced the music industry to adapt quite suddenly, which seems to have brought out the best in Kings K, putting on two high quality livestream productions and an EP during that time. It also led to a unique idea for their next album: touring it before releasing it. Having personally gotten to experience it in that setting made me hungry to hear the studio version, and now, months later, its finally here.

Oddly, though, Baptized Imagination is not entirely the album I was expecting. For starters, two of the recent singles, Forever Again and All the Emotions, are missing from the album entirely (the former was even performed on the albums tour). Initially, I found this to be unfortunate, though my assumption is that theyll be on Kings Kaleidoscope, another new album which drops early next year (which already has me excited, as Forever Again is one of my favorites of their 2022 singles). I was also taken aback by how chilled out the album is. It definitely has its moments of classic Kings Kaleidoscope bigness, if you will (DOWN and JOY are a couple of good examples), but if you go into the album anticipating a hefty portion of that, youre going to be lost and confused (speaking from experience). Much of the tracklist is calm, quiet, and reserved, with Chad Gardners emotional (and maybe a bit too falsetto) vocals carrying the narrative through mostly relatively short tracks. Still, though, despite not really matching my stylistic expectations, the Kings K crew knows how to write good music, and theres no absence of beauty to be found. The band is still as experimental as ever, with no instrument being outside of the realm of possibility. Songs like Walk Away and the acoustic guitar-driven Every Death are simply gorgeous; they may not appear so at first glance, but given time to bloom, they readily reveal their true selves. So despite their quieter nature, theyre still full-on Kings K songs.

The biggest surprise for me, though, is the album's theme of deconstruction. The bulk of the album deals with Chads struggles with his faith, laying his feelings bare and asking a lot of questions that may or may not seem familiar to your own walk. Chad admits his feelings of inadequacy early on in Wasnt I Worth It? Not a lot of words are used, but its nonetheless effective at conveying that sense of brokenness and causing the listener to empathize. Water Wasted gets deeper, expressing his desire to find meaning but feeling lost: Against the ceilin' I'm fiending to find some peace now / and I'm addicted to wishes I'm fixin' right now / crawlin' back to the calling, am I free to fall now? / Redline living can't get enough / too far down for giving up / tell me where I lose Your patience  And I'm waiting in the fallout, knocking on the same door / oh my God, are You gone? The feeling like God is absent is echoed in Look. At. Me., where Chad begs for peace and direction, and the banger DOWN, where he asks, If Ive got You, then why dont I still have enough? The question is heavy and audacious, but all too familiar.

A lot of times, these kinds of questions lead the asker away from God altogether. But throughout the album, with all of its struggles and crises, we keep getting little glimpses of Christ here and there, until eventually things start turning around somewhere around You & I Again, which then comes to a fantastic crescendo in JOY. The song brings to mind the resolve of John Mark McMillans Nothing Stands Between Us, as Chad starts belting out Every moment I play back, You live in it / I can feel every way that You've been in it / You're the voice of the mystery, I'm listening / You're the face of forgiveness I'm taking in / You're the eyes of commitment, I'm giving in / You're the joy of the joy that I'm living in, while chants of Down in my heart to stay triumphantly lead the song out. Its capped off with Past, Present, Future, which is a great song, but doesnt feel as powerful of a closer as JOY couldve been. However, the way the song brings the album to a close, with those final notes, it sounds like an audio version of to be continued... I cant help but feel that Kings Kaleidoscope is going to be a sort of sequel or companion piece. If Past, Present, Future ends up serving as a bridge into the opener of the next album, its going to be quite satisfying.

I think its safe to say that this was not the album that anyone expected, especially attendees of the Baptized Imagination Tour. Admittedly, my first listen was lackluster and even disappointing. But after spending a good deal of time with it, poring over the lyrics and digging into it as much as possible, I actually quite like it. Kings K has made better music (and better sounding music, if were being honest), but Baptized Imagination is a lovely album at its core, and if you give it some time, it just might surprise you.