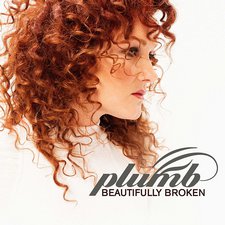 
Over the course of her twenty-plus years in the Christian music industry, Plumb, aka Tiffany Lee, has run the gamut of styles with rock/pop string-soaked songs, children's lullabies, and modern pop, just to name a few. Her lyrics have always leant themselves to encouragement, and are one of the reasons for her staying power in the industry. These are messages that she has lived herself, along with her battle worn experiences, and they've served her listeners well. With new full-length album, Beautifully Broken, we see veteran musician Plumb rounding out her 2017 independently released EP, God Help Me, with six brand new songs. God Help Me was enough to leave this reviewer wanting more, and eagerly anticipating this 2018 release. However, one wonders what shape these new songs will take.

Musically, "Beautifully Broken" (the title track for an upcoming feature film), and second song "Impossible," answer this question immediately. Both eschew the rock/alternative of her early roots, and lean on her more recent forays into radio ready pop. This is not a bad thing, as Plumb does the modern pop sound well, it just left this reviewer slightly disappointed that there were not more rock oriented moments. That disappointment aside, there is much here to enjoy for old fans, and potential new fans alike.

Song "Beautifully Broken" serves as a lyrical thesis for the entire album as Plumb shares the message that, "You're beautifully broken/and you can be whole again/even a million scars doesn't change whose you are/ you're worthy/beautifully broken." This timeless message is set to the musical lead of piano and big drum sounds that have been in vogue for the last ten years of pop music. "Impossible" follows with more driving drumbeats and the somewhat sunny lyrical cliché, "You make impossible seem possible for me."

Songs that truly standout in the track list are the trio previously released on the EP, "Crazy About You," "God Help Me," and "I'm Not Alone." The strength of song "Crazy About You" comes from the perspective of God singing lines to the listener like, "you screwed up/made mistakes/Got dirty from the messes you've made/But I whisper, 'that's okay'/I love you/despite what you say." The familiar piano/drum combo sets up Plumb's plea to God, "help me to move/help me to see/help me to do whatever you would ask of me" In addition, with "I Am Not Alone," Plumb shines vocally as she sings the refrain, "I have nothing to fear/I'm not alone/I'm not alone" as the music swirls and swells in the background. The rocker "Acrobat" is also a great song that was also previously released, and likely still the best song overall. There is a fuzzy guitar, drum, and synth combo that strikes just the right balance, as Plumb vulnerably shares her struggle in the chorus saying, "I feel like an acrobat/gotta be strong/gotta be fast/it's a balancing act/gotta be this/gotta be that."

The best of the new batch of songs is the general encouragement of "Human," that reminds us that, "we're all human/our hatred is useless/we all have a heartbeat/even though it may be aching/from the love we don't feel inside/we're all human." Closing track "Sleepwalking" rises out from the rest of the pack because of its simple piano ballad approach. It allows her powerful, yet tender voice to take front and center, and it is something that would have served the album well in larger doses.

Overall, the biggest criticism that can be levied at this album is that the six new songs do little to stand out from the previously released five, and in this reviewer's opinion, do not measure up to the former's quality. Lastly, though this record will certainly appeal to teen girls and women in general, it would be a mistake to overlook it as such exclusively. The messages of Beautifully Broken --ranging in topics from finding our identity in Christ, to God's love for us no matter what, to seeking balance in life--are not exclusive to one gender, and will benefit anyone if they will take them to heart. Though it has its faults, this is one of the better pop releases of the year so far, and it would not surprise to see some of the songs take off on radio given the chance.

Last year's God Help Me EP from Plumb served as a nice appetizer to tide listeners over until getting a full-length album this year. Newly signed to the Centricity Music label family, Plumb has fleshed out the EP into the LP, Beautifully Broken, creating a more complete, thematic experience. While most of the new tracks aren't quite as good as the EP cuts, the overall album is a cohesive project that proves to be just as encouraging to listen to as it is enjoyable. Plumb reveals once again that she can cut right to your heart while reminding us of basic, crucial principles--like our worth in Christ--and give us a great sounding pop record in the process. I suspect this will be one of my top favorites of this year. - Review date: 6/20/18, John DiBiase of Jesusfreakhideout.com