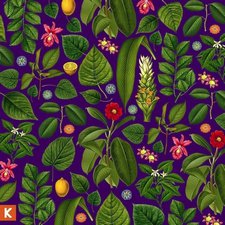 Kings Kaleidoscope
Becoming Who We Are

Just last year, BEC Recordings announced a partnership with Seattle-based Mars Hill Music, which meant exclusive releases for BEC from artists like Dustin Kensrue, Citizens (now called Citizens & Saints), and Kings Kaleidoscope. Earlier this year, however, Kings Kaleidoscope announced a departure from the Mars Hill family (and, as a result, the Tooth & Nail family) and promptly teamed up with BadChristian Music to release a very impressive, impromptu EP called Live In Color. Shortly after, they teamed up with Tooth & Nail for KK's first full-length album, Becoming Who We Are, and it's easily one of the best releases from the Tooth & Nail brand (as well as in general) in a long time.

Though it wasn't really their first release, Live In Color was a great way to introduce the band to a new and potentially larger audience. Featuring six songs (trimmed down to five for legal reasons) recorded all at once in various parts of a local middle school, the tracks were stellar, but were minimally-produced and recorded with an old-fashioned Norma Jean/The Chariot mindset of "There are mistakes? Oh well, let's leave 'em in." But it came out wonderfully nonetheless. And it's really nice to hear four of the EP's songs re-recorded and included on Becoming Who We Are, as well as two re-recorded songs from earlier releases (one from Sin and one from Asaph's Arrows), making up a whopping 17-song tracklist.

For purposes of general classification, Becoming Who We Are would probably be filed under "indie," but it's a lot more than that. On your first listen, you'll be surprised by each and every new song, as you never really know what to expect. With a band that sports ten full-time members, there are bound to be a wide variety of influences, and as such, you can hear influence from bands like New Order, Five Iron Frenzy, The Roots, Arcade Fire, fun., Muse, The Beatles, and (quite obviously) other now-former Mars Hill bands like Dustin Kensrue and Citizens & Saints. There are even a couple of drum-heavy EDM tracks that remind me vaguely of the "Hutch Buggin" tracks from Earthsuit's The Rise of Modern Simulation. Even still, there are times where the style changes before the song is over, such as the album version of "Fix My Eyes." What was previously a piano-led song accompanied only by a threepiece string section for the Live In Color EP shows its true, and original, form for Becoming Who We Are. It starts off with a beautiful new wave vibe, but by the end (and during the chorus), the song has transformed into a rock/ska mixture of sorts. Kings K's wonderful cover of "Grace Alone" is done in a similar kind of way, but with almost opposite sounds. It starts with just a guitar and Chad Gardner singing the Dustin Kensrue-penned lyrics, and during the third verse, some Beatles-esque light drums and bass join the mix, and eventually finish with another round of softer rock and brass.

I could just go on about the beauty of the musicianship of this album. You hear a lot of music fans and critics (myself included) complain about the lack of diversity and creativity in modern music. But there are also the artists who experiment too much to keep the music high quality enough to be listenable. It can be difficult to balance quality and creativity, but Kings Kaleidoscope does it. To top it off, Gardner is also a wonderful lyricist. Of course, several of the songs on Becoming Who We Are were written by somebody else, but Gardner's are on the same level, if not above it. "Glorious" starts off with a David-Crowder-meets-Arcade Fire-esque indie sound, with amazing imagery concerning God's love for us: "You came in a minute, You took me by surprise, with a love like summer air on a moonlight mountainside." "I Know" reminds me of something I could hear from MuteMath, and sings about longing for Heaven, knowing that he will one day dance and sing on the streets of gold. A few tracks later, a re-recorded and re-arranged version of "All Creatures of Our God and King" (or just "All Creatures" here) features several xylophones played in a different time signature than the vocals. Originally written by St. Francis of Asissi, the lyrics hold up well, and are even better than today's norm.

My favorite song of them all is "139." Based on the 139th Psalm, it's a song about the deepness and intricacy of God's love for us. With some perfectly-complementing guitar work, Gardner sings "You heard my first heartbeat before I could breathe, before my first cry, You knew me, You knit me together when I was conceived, when I was designed, You knew me." The chorus is a reminder that God would be with us no matter what, whether we climbed the highest hill or swam to the deepest ocean, and the bridge (picking up in pace a little), says "You are the God who knows and loves me, the God of David, the Rock of Ages, You are the King who dwells above me, the King of Zion, the mighty lion." Listen to this song with headphones and no distractions, and just let God speak His love to you. It flows perfectly into another pleasing track, "Redemption In Motion." The song is rather short and, musically speaking, works as sort of a continuation of "139," but switches gears lyrically to reflect Jesus' death and resurrection as He "set redemption in motion." "Zion" is a heartwrenching but lovely song about a miscarried baby (named Zion), and how he and his parents will meet again someday. It's just about the slowest track, which is appropriate considering the subject matter. The Gardners' faithfulness to God despite the miscarriage is a fantastic testimony - a true inspiration to anyone going through a tough time in their life. Finally, to close the whole album is the victorious "Defender." Re-recorded for this new album, the song's arrangement stayed the same (why mess with perfection?), and it serves as the perfect finale for Kings Kaleidoscope's major label debut.

To point out all the highlights of this album would make for an extremely long read, because the entirety of the album is a highlight. It's incredibly obvious that great care was taken when writing and arranging these songs. Beautiful harmonies, wonderfully-catchy hooks, interesting uses of various instruments, expertly-written and reverent lyrics - this album has it all and so much more. It fits so very well into my musical library as a musical album and a worship album. It's what I and so many others long for. You need this album.

- Preview Review date: 10/3/14; Review date: 10/21/14 written by Scott Fryberger of Jesusfreakhideout.com class="coversize" align=right> Early Thoughts...
Worship bands come and go rather frequently in today's Christian music industry, with a plethora of albums from under-produced indie acts to over-produced giants commandeering the top spots on the digital stores' Christian sections. Some of them are good, and some are just unspeakably bad, and every once in a while, one of them is just utterly jaw-dropping. In 2014, Kings Kaleidoscope are responsible for that next great worship album. Becoming Who We Are is a wonderful worship album that fuses many different styles and genres, yet keeps its focus on our Savior and His goodness. The band's heart for Jesus is expressed in each and every track, and the ten members all work overtime to present the highest quality musicianship and musical creativity they can. From the atmospheric indie sounds of "Glorious," to the somber "139" to the victorious closer "Defender," both the competent music fan and those who just want new songs to worship to will be satisfied. At the end of October, this is an album you will need to pick up. In fact, check out the pre-order options which include some gnarly vinyl options as well as CDs and t-shirts. It's my album of the year, hands down. - Review date: 10/3/14, written by Scott Fryberger of Jesusfreakhideout.com --->

Occasionally there are bands that produce art that is beyond good - and on very rare instances there are bands that create something that demolishes what you thought was good. Kings Kaleidoscope's first full-length album, Becoming Who We Are, is here to redefine what music can be. Tracks like "Glorious," "I Know," and "Life After Darkness" contain worshipful elements that might make really interesting additions to corporate worship services. However, this isn't the sound that most are used to; these are new standards for new days - so be forewarned that the musically-confined may look dazed and confused. King's K also covers some excellent hymns (modern and old), such as "Grace Alone," "All Creatures," and "How Deep." Each of these receives a very gentle change while keeping the heart of the songs true and unaltered. Truth be told, the shorter tracks are some of the greatest highlights of the album. "Redemption in Motion" is sure to get the listener pumped while being encouraged that Christ's completed work is sanctifying the believer.

An amazing and heartfelt song is the emotional "Zion." As mentioned during episode 27 of the Bad Christian podcast: this track came about after lead singer Chad Gardner and his wife had a miscarriage. This song ministers deeply to listeners who have gone through this tragedy. It clings to the hope of Jesus while not ignoring the pain - a delicate and honorable balance. The album concludes with the aggressive "Defender." (JFH actually featured a previously recorded live rendition of this on the latest free compilation release.) The updated studio recording is fantastic and improves on what was already a near-flawless track.

From start to finish, this album is perfect. Every track is thoughtful, poignant, and has a purpose - 17 tracks of pure musical bliss. If you enjoy worshipful music or if you simply are a music connoisseur who desires something new and certifiably fresh - this is the album you NEED. And once you buy it, you should buy it again for someone else - it's that good. There are bands that make good art, and then there are bands that redefine it - King's K is trailblazing a new path for artists. Without a doubt, 2014's greatest album. - Review date: 10/26/14, Ryan Barbee

Cutting straight to the point, Becoming Who We Are is possibly the best worship album ever made by anyone not named David Crowder, and even that is debatable. The ten-membered Kings Kaleidoscope does nothing all album long but inspire awe--not only awe of the immense creativity of tracks like "Redemption In Motion," "Dreams," or "Glorious," but awe of God. "All Creatures" and "How Deep" are among the finest hymn covers made in recent memory, and even the former Mars Hill band's cover of "Grace Alone" (standard inclusion of Mars Hill artists) is interpreted with a new breath of creativity. Getting any one of these songs incorporated into Sunday mornings would definitely be a challenge, but with songs like "Defender," "Seek Your Kingdom," or "139," the challenge is easily worth it. - 10/26/14, Mark Rice of Jesusfreakhideout.com