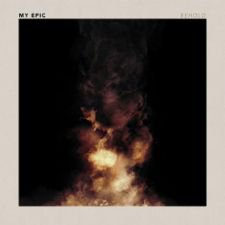 My Epic are somewhat of an anomaly amongst the Facedown Records roster. While Facedown is generally known for their metal and hardcore output, My Epic is likely the softest-sounding band in their lineup, leaning more towards the indie/post-rock side of things. Even though My Epic doesn't have much in common with their peers sound-wise, their music is no less spirit-filled or hard-hitting. Their 2010 album Yet appealed to both post-rock and generic rock fans alike, and with their latest album, Behold, My Epic have become a little more soft and experimental, but in doing so, they seem more comfortable and confident than ever before.

Behold is a concept album split into two parts. The first part is a trilogy in the form of three tracks on the album spread through the beginning, middle and end of the album: "Arise," "Approach" and "Arrive." These three songs tell the story of Christ and his impending return, and musically, they are all linked together through their melodies. The second part of the concept consists of the remainder of the songs on the album, which are all songs intended to be sung to the Lord. In this way, Behold becomes a worship album of sorts, and a really good one at that. Worship music has become, frankly, a very boring genre with little to no artistic integrity behind it, and the fact that Behold plays like a worship album is very exciting. Their powerful melodies, musical ambience and moving instrumental passages breathe a new and much needed life into worship music that is a far cry from what worship music has become.

The songwriting on Behold is superb. Songs often begin slowly and build into a moving crescendo, before dissipating back down into a beautiful atmosphere. The lyrics are also quite masterful. Vocalist Aaron Stone has a very unique voice, and it's easy to hear the conviction and passion behind what he's singing. This album is a great reminder of God's undying love for us, a reminder which can never be heard too much. Overall, Behold is a fantastic album that might just be a pleasant surprise for those who thought 2013 had exhausted all of its best music. I know it was for me.

Listeners who enjoyed this Charlotte-based outfit's previous two full-length outings will likely find much to grin about this time around as well. The band's ability to take already-familiar elements (indie rock, post-grunge, dream pop, experimental music) and combine them into something altogether unique is an imposing achievement in and of itself. Even more impressive, though, is the way in which the tracks on the new record are joined seamlessly together by the indelible stamp of the group's trademark sound without any two of them sounding exactly alike. Those searching for signs that all praise-oriented music need not be cast from the same overused mold need look no further than this mesmerizingly atmospheric release. - Bert Gangl, 1/3/14