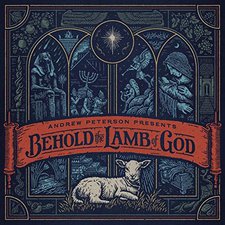 
Twenty years ago, Andrew Peterson began a Christmas tour that turned into an annual tradition. The "Behold the Lamb of God" event has carried on for so long due to the love the artists involved put into it and also its success, often selling out every venue Peterson and company play. In 2004, Peterson tried capturing some of the live magic in a studio album version and released it independently. Now, on the eve of the tour's 20th anniversary, Peterson has re-recorded the entire album and is "officially" releasing it through label Centricity Music.

Behold the Lamb of God bears the distinction of being a conceptual Christmas album. "Gather Round, Ye Children, Come" opens the holiday festivities as an invitation to hear the biblical Christmas story. But Peterson isn't just focused on the New Testament side of the tale; the next four tracks give an Old Testament running start to why Jesus was needed. The standouts here are "Deliver Us," with its stinging coda, and the instrumental take on "O Come, O Come, Emmanuel." The New Testament-based songs start with "Matthew's Begats," a humorous rendition of the genealogy found in Matthew 1. The next four tracks tackle various aspects of the birth narrative before the title track comes in to give a broader perspective of Jesus' life. "Theme of My Song" acts as a reprise and feels like a grand finale to a Christmas pageant.

Given 20 years of touring history with these songs, Peterson brings in plenty of guests with the new recording, even stepping aside from the mic to let other vocalists, like Andy Gullahorn and Jess Ray, take over. Their additions help things feel fresh and give the album the feeling that this is bigger than Peterson and is really about Christ and His people. The album is also effective in feeling like a cohesive whole. I mentioned the pageant feel of the final track, but you could really picture it throughout. What weakens this album, though, falls to Peterson's melodic composition. The lyrics are theologically rich and each song could be a sermon unto itself, but the music is largely unmemorable and doesn't give the words enough sticking power. Part of this is due to Peterson's tendency to cram so much into one verse that it requires multiple listens to fully comprehend. Multiple listens aren't bad as long as the music also makes it worth coming back.

This leads to probably the biggest frustration with this re-recording. Peterson's recent albums have shown much growth not only in his lyrical prowess but also in his music. Consider last year's Resurrection Letters, Vol. 1; that album also contained songs chock-full of depth and meaning, but the music and melodies were infectious as well. Behold the Lamb..., in spite of its fresh paint, still feels like an early Andrew Peterson record. Given 20 years to perfect and update these songs, one would hope for some more tweaking beyond added instruments or vocalists. Those frustrations aside, this is a Christmas album worthy of consideration. Peterson's fans will enjoy the wider availability of this release and find the fresh take sufficient. More casual listeners will also find nuggets of Christmas cheer that will satisfy even if the album doesn't become a holiday favorite.