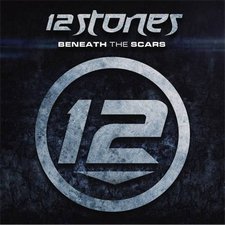 12 Stones
Beneath The Scars

12 Stones returns five years after the release of their last full-length album and two years after the release of their 5-track EP. The band, finally free from the seeming prison of Wind-Up Records, is releasing their fourth album, Beneath the Scars, on EMG. While it seemed that Wind-Up had lost faith in the Louisiana boys, a change of scenery has proved to be a much needed event, as evident in their newest musical endeavor. 12 Stones have never been a band to play by all of the typical radio rock rules and this album is really no exception. Their biggest downfall with the mind set is having no real notoriety (other than Potter's Field hitting number 2 on the Christian charts). In fact, the only recognition they've really ever received is from front-man Paul McCoy's appearance in their former label-mate's song. Despite their lack of big-time success, McCoy and Eric Weaver coupled with the return of original drummer, Aaron Gainer, and new bassist, Will Reed, deliver an absolutely solid musical product.

Beneath The Scars opens with "Infected" and a killer guitar riff sure to peak your attention. The opening track really gets the energy up in a hurry and shows that McCoy and company are still a relevant band. The lyrics focus on the sick state of the world we live in today, as McCoy proclaims, "I feel weak. I feel numb. Had enough of this poison we've injected. Living in this world infected." This is definitely an album stand-out. "Bulletproof" is next up and positively keeps the energy and tempo up. The ballad "For the Night" is next up, followed by another rocker in "Worlds Collide." While "Worlds Collide" is a good listen, it is proceeded by one of the band's best in "That Changes Everything." The words in the chorus are some of the highlights as Paul sings, "If I fall from the ledge I don't want to die with regrets. I see the ground coming, I'm not gonna run anymore. I can make my amends, I swear I won't fail you again. I was ready to die till I saw you suffering, and that changes everything." The the overall feel is that of a love song, but one can't help but think of their Savior while listening to the chorus.

The disc continues to battle back and forth, in a typical rock record roller coaster ride, for a bit between straight up rock songs and slower ballads, including the slower "Bury Me" and the party rocker "Psycho," but things get interesting again lyrically with "Someone Like You." The lyrics here speak on hypocrisy and deception. McCoy sings, "The mask you're wearing is hardly you. The lies you're preaching are nothing new," in the opening verse. Even though there is some solid lyrical content early on, the most spiritual theme comes in the second to last track, "Shine on Me." Paul cries out, "I'm not scared. I feel You here when You're far away. The light You bring it always just seems to shine on me. You're all I need." The record comes full circle, ending where it began, with "Pretty Poison." McCoy goes back to the theme of poison used in the opening track, but focuses more on personal issues over a general world view. The song is left open and doesn't focus on any particular struggle, making it easy for any listener to relate. The chorus line, "Pretty poison you're in my veins; Go away, go away. Won't you leave me for just one day? I don't need you anymore," leaves you thinking of your own struggles and the desire to be removed from them.

While God, or Jesus, isn't mentioned once in the album, the masters of the "Christians in a band" mantra do a respectable job of mixing seemingly normal lyrics with spiritual themes. While I miss the days of "Broken," from their debut when they were a little more straightforward with their message, one really can't complain about the lyrics on the album. On top of good overall lyrical content, the music doesn't disappoint. While they do add the ever popular violin into their music, thankfully they do it sparingly. In fact, the violin is mainly used during softer acoustic portions and doesn't feel forced into to every rock session like Red, or especially Skillet, tend to do. Speaking of Skillet, this album is sure to draw comparisons to Skillet's Collide era sound, and rightfully so. Songs like "Infected" sound oddly similar to tracks like "Forsaken" from Skillet's 2003 hit record. Some may point out that McCoy even sounds like Cooper on several occassions. While this is true, a listen of the 12 Stones discography should shy away notions that it is intentional. McCoy's voice, whether intentional or it's wearing down (a-la Audio A's Mark Stewart), has become a little more raspy with each album. Eric Weaver mixes up solid rock riffing, breakdowns, and solos throughout. While the sounds can be compared to the same Skillet album, Weaver's skill level shines through. It seems that solos have become a lost art within rock music (other than in metal), but Weaver executes nicely timed solos that blend it perfectly with the songs. The rock songs on Beneath the Scars are some of the band's heaviest and most aggressive to date and the ballads are some of the most well-rounded in their career.

When you add up to positive nature and spiritual themes of the lyrics along with the solid music throughout, this is easily the best from 12 Stones to date. While The Only Easy Day Was Yesterday EP was definitely a view into the band's state of mind and where they were wanting to head sonically, it took breaking away from Wind-Up to actually make this happen. Though Wind-Up gave rise to several bands, each artist eventually left and grew, or died there quickly. Thankfully, the guys in 12 Stones persevered and have come out the other side stronger than ever. While they are sure to draw comparisons to your typical radio rock bands, their overall product is much better than other generic bands getting constant play; Beneath the Scars should not be overlooked as "just another rock record." While it is a bit of a re-tread musically, thankfully it's a re-tread of an older, more raw, version of rock and not the string saturated, softer rock sound that is being copied over and over today. And really, is it that bad to have your album compared to one of Skillet's top records? The only easy day may have been yesterday, but 12 Stones continue to fight on despite all of their challenges. This should be one of the best rock albums in 2012.