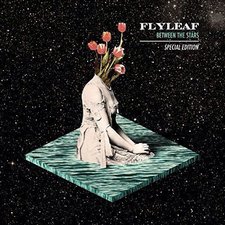 Flyleaf
Between The Stars

Flyleaf fans were crushed two years ago when the foundation of the band, Lacey Sturm, announced her intentions to leave for family life prior to the release of New Horizons. Kristen May was quickly announced as her impending replacement and took over as Lacey stepped down. To give fans a taste of what could be with May, Flyleaf released the Who We Are EP last year. The EP was a collection of live songs with one pop-heavy new addition, leaving fans to wonder about the group's upcoming musical direction. Finally, Between the Stars is upon us, but the change in sound may be bigger than some fans are willing to accept.

The album opens with a second consecutive lead-off song about fire; it's a bit strange, but somehow fitting. Lacey opened her final album with the hard rocking "Fire, Fire," while May begins her career with the pop/rock "Set Me on Fire." The opening riff gives hope of the old Flyleaf days, but the poppy, funk feel of the guitar that follows quickly puts that hope to rest. The track is also the introduction of May's odd "vocal solos" interspersed heavily throughout the album. In the song, and several others, an instrumental break will feature May singing some sort of amalgamation of "oh," "ah," or something else of the like over the music. Many of these spots could have benefited from a guitar solo, but at the very least would have been better without the added vocals. "Magnetic" is up next and most closely resembles the song "New Horizons" musically. "Traitor" is probably the best track on the album and most reminiscent of Lacey's Flyleaf. From here, the album meanders along for a bit. The 80's feel in "Platonic" doesn't add anything particularly special and the poppy "Head Underwater" doesn't really hit either. More pop/rock ensues in "Somber Serenade" and "Thread," and while "Marionette" reaches for emotion, it doesn't garner much. An unusual organ-like keyboard sound opens "Well of Lies." The song is one of the more interesting musically and is the only really enjoyable tune down the stretch. "City Kids" is a slower pop/rock song that adds some unnecessary screams into the chorus (behind Kristen's vocals) in what feels like an effort to "do what Flyleaf is supposed to do." "Blue Roses" is possibly the poppiest song on the album and leads to the decent, but fairly underwhelming closer, "Home."

It's hard for one to sit back and judge this album. Judging it as a Flyleaf album means it's nowhere close to the mark and easily falls short off all their previous works. The hard rock edge is gone in favor of a poppy sheen and Kristen May just doesn't have the same vocal ability as Lacey. That's not to say that May can't sing, as she most certainly can, but she simply has a different skill set. Judging this album as a brand new band possibly lends it a little more credit. The album is easily up there with the likes of similar bands, but Flyleaf has always outperformed said bands. In the end, Flyleaf's name is on the record, and thus it's just not up to par for what's become expected for the group -- especially with declines in songwriting (lyrics), vocals, and music. There are some positive moments, but most of all, it feels like a completely different band who is trying to determine their identity. Lacey Sturm has some really big shoes to fill and Kristen May still has some work to do to fill them. It seems most likely that the pop elements within the band are going to continue to grow and that rock 'n' roll edge that Flyleaf fans thrive on will soon disappear. Fans of May's previous band, Vedera, should eat this album up, but the hardcore Flyleaf alum may want to skip Between the Stars.

Kristen May does, indeed, have a daunting task in her debut full-length album at the helm of Flyleaf. Lacey Sturm left a legacy matched by few female vocalists in the realm of Christian rock, and as with the exit of any lead singer from a high-profile band, May is left to endure endless comparisons for the foreseeable future. But to her great credit, on Flyleaf's fourth studio album, Between the Stars, May hits the ground running, and her performance is, indeed, one of the highlights (if not, perhaps, the highlight) of the whole record. Right from the opening verse of "Set Me On Fire," May proves to be both comfortable and confident in her role, not trying to replace Lacey as much as she is simply claiming the part for herself. But that is not to say that the album itself is not a bit rocky. Indeed, after a bristling start with "Set Me On Fire," and (to a lesser extent) "Magnetic" and "Traitor," the album sets into a bit of a groove and has some significant trouble escaping from it (though "Well of Lies" makes a valiant effort by blindsiding the listener with a sick keyboard hook). With neither the raw sonic appeal of 2005's self-titled debut nor the alternative experimentation of 2012's New Horizons, Between The Stars feels less daring than it probably ought to for a band whose core members have been together since their inception in 2002. Boring is the wrong word, as any one of these songs on their own is quite enjoyable. Nor can I really say that the songs sound too similar and run into each other. And lyrically, they don't shy away from serious substance. I guess, when it comes down to it, the best way I can describe Between The Stars is as a safe-sounding album from a band seeking to re-establish their identity in the wake of losing their iconic star. Between The Stars is far from bad, but simply feels creatively lackluster and presents a machine-like aura about itself. But Between The Stars was able to teach me two significant truths; a Kristen May-led Flyleaf has all the pieces to make phenomenal albums, but they will have to wait until after the growing pains of Between The Stars. - Review date: 9/14/14, Mark Rice